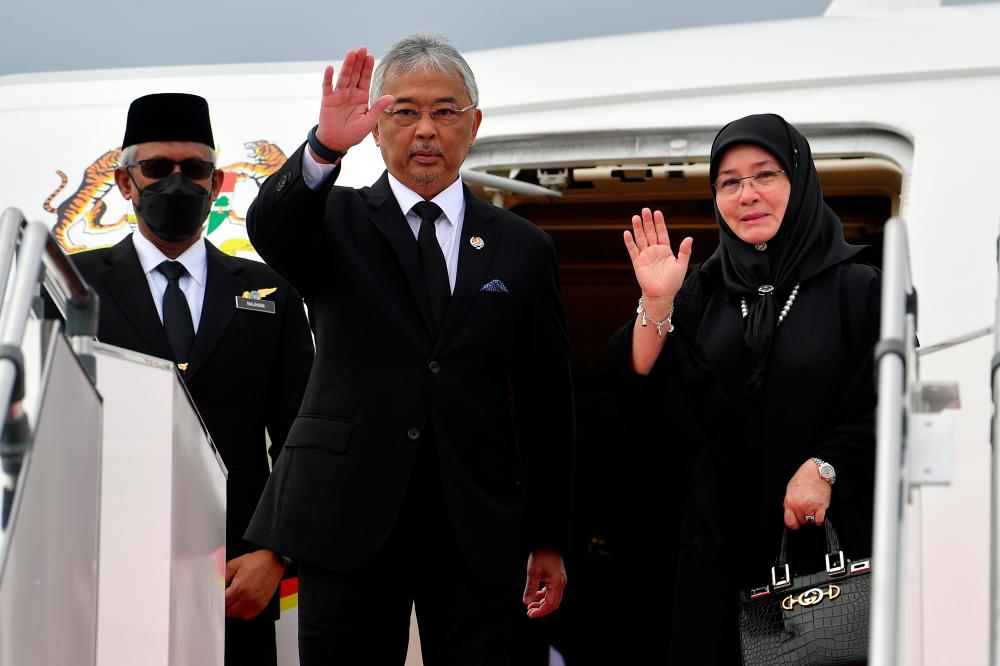 Prior to the departure, the Istana Negara’s religious officer Datuk Munir Md Salleh recited a prayer for the protection and safety of Their Majesties.

Their Majesties went through the guard-of-honour before boarding the plane.

As part of the special visit, Their Majesties will both attend the Reception Ceremony with the King of Britain, King Charles III this Sunday (Sept 18) and the state funeral of Queen Elizabeth II on Monday (Sept 19) at Westminster Abbey.

Al-Sultan Abdullah is also scheduled to hold meetings with several foreign heads of state while in the UK.

According to media reports, the Queen’s body is now in London, where she lies in state in Westminster Hall until the state funeral on Monday.

She was the second longest reigning monarch in European history after King Louis XIV of France.

Their Majesties both met Queen Elizabeth II at Buckingham Palace on Dec 13, 2019, where they attended a luncheon that was held in conjunction with the seven-day special visit of Their Majesties to England at that time, from Dec 9, 2019.

Al-Sultan Abdullah has been friends with King Charles III for more than four decades and played polo together during their youth at various levels of international tournaments.

Malaysia and the UK have had close bilateral relations since Malaysia’s independence 65 years ago.

Al-Sultan Abdullah previously ordered that the Pahang state flag be flown at half-mast for three consecutive days starting Saturday (Sept 10) as a mark of respect for Queen Elizabeth II.

Following the special visit to the UK, Their Majesties’ state visit to Singapore originally scheduled for this Monday (Sept 19) has been postponed. - Bernama