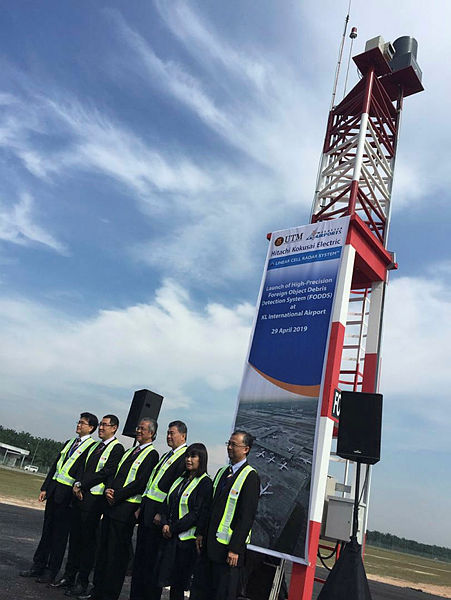 The foreign objects debris detection system (FODDS) tower at the KLIA that was commissioned on April 29, 2019.

SEPANG: Kuala Lumpur International Airport (KLIA) is now equipped with a system that detects objects that are not meant to be in its surroundings.

The system, which was launched at the airport this morning, is a collaboration among Malaysia Airports Holdings Bhd (MAHB), Universiti Teknoloji Malaysia (UTM) and Hitachi Kokusai Electric Co Ltd (HiKE). The system was developed by HiKE and UTM is the academic partner.

A joint statement by the three parties said the system was designed to detect debris as small as 3cm up to 500m away within 10 seconds.

It said this was essential given that aircraft take off and land only minutes apart. Such objects could injure those at the airport and even damage aircraft.

MAHB group CEO Raja Azmi Raja Nazuddin said KLIA had continuously kept up with global practices on safety standards and procedures at its airports and their surroundings.

KLIA is the world’s first airport to be equipped with FODDS after a successful test run of its prototype at the Narita International Airport in Tokyo.