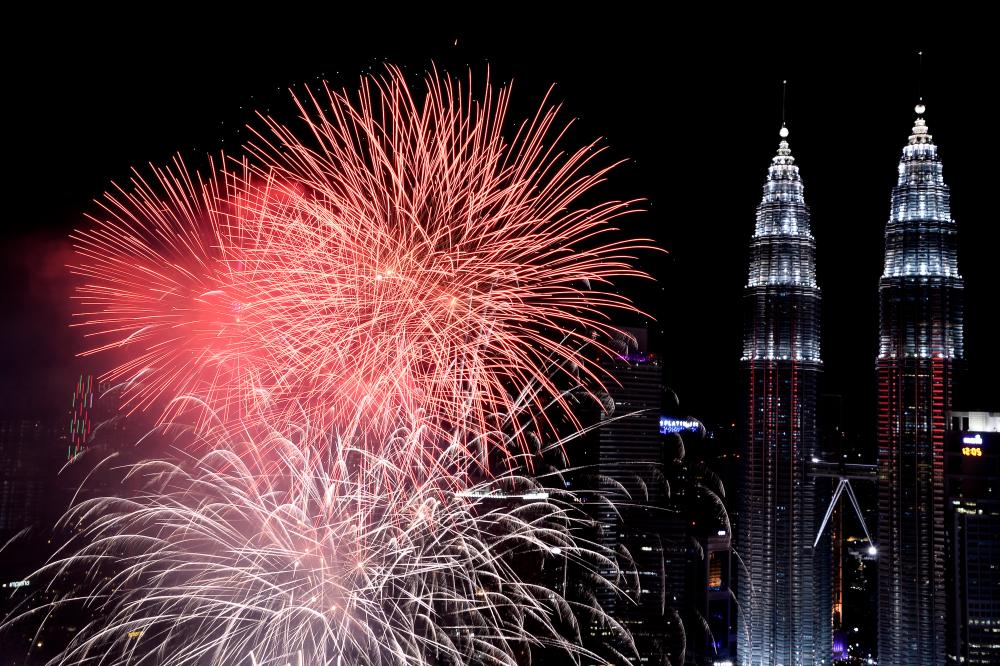 Fireworks at the city centre, at the stroke of midnight.

KUALA LUMPUR: At the stroke of midnight, Kuala Lumpur ushered in 2020 with a colourful presentation of images filling the skies over Dataran Merdeka in the federal capital while fireworks displays lit up cities and towns throughout the country.

As soon as the clock on Sultan Abdul Samad building rang out 12 times, Dataran Merdeka witnessed a glittering display of the Light Show in the Sky, marking the arrival of the New Year 2020.

The special countdown to 2020, held simultaneously with the launch of Visit Malaysia Year 2020 (VM2020), saw the graphic presentation of the kite, the Hornbill, Musang King durian, Jalur Gemilang national flag and trishaw for more than 10 minutes before it culminated with a fireworks display.

Thousands of people thronged Dataran Merdeka to ring in 2020 and witness the launch of VM2020 by Prime Minister Tun Dr Mahathir Mohamad.

The multi-event New Year’s eve celebrations began at 8.45pm with the singing of the national anthem Negaraku and Malaysia Bersih.

Meanwhile, French tourist Fontes Thibault, 31, said he was happy to celebrate the new year in Malaysia.

“We’ve never been in Malaysia, why not? We have time to kill ... So we thought to come over to celebrate New Year’s eve in a country that I haven’t visited before,” he told Bernama.

A local reveller, Rosli Hanafi, 36, from Batu Caves, said the new year countdown in the federal capital was among the events he looked forward to every year.

“During my student days I used to celebrate new year at Dataran (Merdeka); now as a family man I still come here to celebrate,“ said the father of one.

In PERAK, more than 10,000 visitors flooded Dataran Maritim in Lumut, the venue for the Ambang 2020 celebration.

The programme began at 11pm with multi-racial cultural performances featuring traditional dances of the three major races in the country, Malay, Chinese and Indian.

The atmosphere was livened up with performances by local artistes like Wani Shaz and Sham Visa before a fireworks show at midnight wrapped up the celebration.

In KUANTAN, thousands of people gathered at Taman Teruntum Mini Zoo to greet the new year, which coincided with the launch of the Nite Zoo and Pahang level VM2020.

The celebration was held on a moderate scale with pantomime, choir and magic show presentations apart from a fireworks display at midnight.

In KUCHING, rain since morning failed to dampen the spirit of more than 10,000 people including tourists who joined the Fiesta Countdown 2020 at the Kuching Waterfront.

The celebration continued with the symbolic countdown 2020, a fireworks show and 2020 “inspiration concert”.

In MALACCA, more than 5,000 people including local and foreign tourists attended the Malacca Countdown Fiesta 2019 and launch of the Malacca-level VM2020 at Menara Taming Sari, Bandar Hilir.

The attractions included the “Tarian Kebudayaan Selamat Datang”, performances by guest artistes, a fireworks display and the New Year 2020 countdown.

In JOHOR, more than 5,000 people flooded Dataran Marina Harbour at Iskandar Puteri to ring in 2020 and witness a cultural show and mini concert by artistes like Joe Filzzow, DJ Dave, Bunga Isme, The Couple Band and Orkes A Hizadin from 9pm.

Two minutes before midnight, Malaysia Games 2020 mascot Jimi handed over a replica of the gambus (musical instrument) to Mentri Besar Dr Sahruddin Jamal to be placed on a platform as a launch gimmick to mark the start of Visit Malaysia Year and Visit Johor Year 2020.

Fireworks then lit up the night skies to bring the celebration to a glorious end.

In GEORGE TOWN, the highlight of the festivities was at The TOP Penang in Komtar which saw fireworks being released from the 68th floor to light up the skies on the island, with the spectacular display visible even from the mainland in Seberang Perai.

In SELANGOR, the new year countdown was held at the Dataran Kemerdekaan in Shah Alam and I-City Theme Park, which is known as the digital lamp park.

Visitors to the two places were entertained by various arts and dance performances and a fireworks show at midnight.

In KELANTAN, cultural performances and a fireworks display were staged in Sungai Golok at the Malaysia-Thailand border in conjunction with VM2020 and the new year countdown.

More than 2,000 people gathered at the festival site of Dewan Bandaran Sungai Golok to witness the colourful ceremony.

The estimated 3,000 visitors were also treated to a fire show by the hotel’s Sports and Recreation Club at the New Year concert stage located on the beach.

Various activities including a food fair were held for some 1,500 visitors to Paradise 101, which is located northwest of the legendary island.

In ALOR STAR, almost 400 people from all walks of life and age groups participated in the Alor Star Festival Ambang 2020 run held in conjunction with the new year celebration.

The participants and visitors were also treated to a fireworks display at the stroke of midnight in the area behind the State Museum. — Bernama