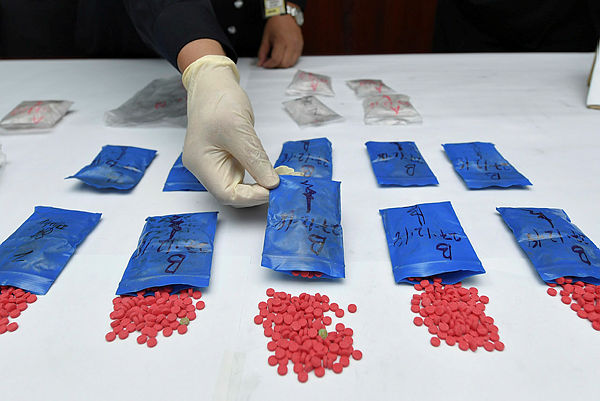 “We checked 299 men and 32 women, and we found almost half of them to be drug users...and during the raids, we seized a total of 35.58 grammes of syabu,” he told a press conference after attending the Labuan Police Family Day at Labuan International Sports Complex, here, today.

The operations were conducted in highly-populated Philippine immigrant communes of Kampung Muslim, Gersik Saguking and Kiansam, besides several areas downtown.

Farid said of the 128 people arrested, six of them were drug traffickers and being investigated under the Dangerous Drugs (Special Preventive Measures) Act 1985.

He said the six men, all Malaysians in their 40’s, were not from Labuan but from Sabah, and Labuan’s entry points (airport and ferry terminals) were being monitored.

“We are going all out to free this duty-free island of drug dens and new markets for drug dealers...and we identify Kg Muslim, Gersik Saguking, Rancha-Rancha and Kiansam as drug hot spots, but we do not rule out there are also drug dens in other villages,” he said.

Farid said the community engagement programme would continue to be held with Kg Kiansam being turned into a police adopted-village and it would be extended to other villages in order to get close to the villagers in addressing social ills. — Bernama

2.No entry of foreign workers, including maids, until Dec 31: Saravanan