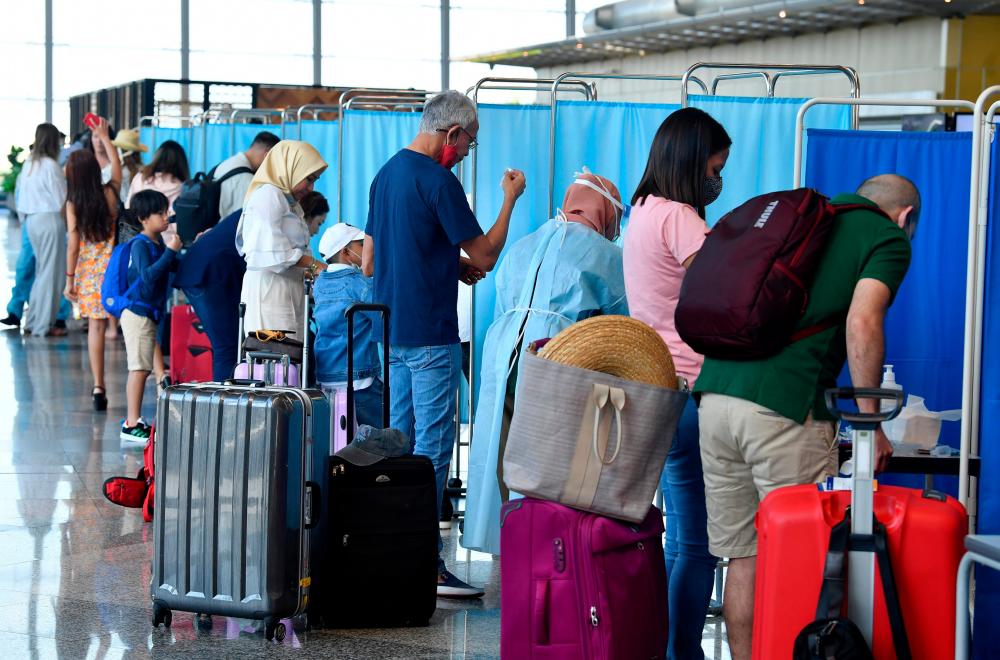 SEPANG: The Kuala Lumpur International Airport (KLIA) arrival hall was buzzing again as many passengers took the opportunity to travel to Langkawi following the reopening of the tourism sector under the tourism bubble pilot project, which began, today.

A survey by Bernama at KLIA found that even as early as 5 am, the airport’s Level 5 area was filled with passengers, who had to undergo several standard operating procedures (SOP) before being given the green light to depart.

Travellers who wish to take a flight to Langkawi must present themselves at the airport’s Anjung Tinjau on Level 5 to undergo the Covid-19 screening test. Health Ministry (MOH) officials will issue them with a confirmation slip upon completion of the test and passengers will be asked to produce this slip at the check-in counter.

Yesterday, Health Minister Khairy Jamaluddin said that travellers intending to visit Langkawi would be required to undergo screening for Covid-19 before departure.

He said the screening test should be conducted on adults aged 18 and above as well as children and teenagers aged seven to 17 years.

Most of the passengers agreed that the move to make the Covid-19 screening test compulsory before being allowed to leave for Langkawi was necessary to ensure a safe journey and holiday.

Nur Zetty Adila Mohd Ali, 34, who is travelling to Langkawi with her husband and two sons, aged seven and 13, said the SOP set by the government was indeed very good to protect passengers from the risk of contracting the Covid-19 virus.

“The entire SOP is very good, and we as passengers also feel secure,” she said, adding that she would always remind her children to adhere to the SOPs, including always wearing a face mask and using sanitisers.

For Bryan Thun, the policy of requiring passengers to undergo a Covid-19 screening test is a step that must be implemented when the country is still fighting the pandemic.

“I think it’s a good idea to get tested so, at least, you know you are safe and protected later on at the island, and at least you have a safe holiday. So, it’s a good regulation to have,” said Thun, who travelled to Langkawi with a friend.

Bernama understands that there are eight flights departing KLIA and klia2 to Langkawi today.

The passengers met at KLIA today were clearly excited to be able to fly again after not being able to do so for a long time due to travel restrictions imposed by the government.

A private employee, Aliff Aiman ​​Ahmad Othman, 35, said as soon as the government announced permission to travel to Langkawi, he immediately booked his tickets online.

“I decided to travel to Langkawi because I wanted to give our two sons, aged five and nine, a surprise after staying at home for so long,“ he said.

Another passenger, Norazliza Mohd Ali described the approval to travel to Langkawi as a meaningful one, in conjunction with her 31st birthday, today.

“I feel like I’ve been confined for a long time, so I took the opportunity to celebrate my birthday there with friends and, at the same time, help revitalise the economic and tourism sectors,” she said.

On Sept 9, the government announced that domestic tourists from all over the country, with the exception of those residing in areas placed under the Enhanced Movement Control Order (EMCO), would be allowed to visit Langkawi from Sept 16.

The resort island, which was selected to be the first destination of the tourism bubble’s pilot project, is restricted to individuals who have been fully vaccinated.

The Langkawi Development Authority expects around 400,000 tourists to visit Langkawi within about three-and-a-half months (today-December) following the resort’s reopening under this programme.- Bernama