Le Tour de Langkawi, a 24-year journey that has surpassed my expectations: Mahathir 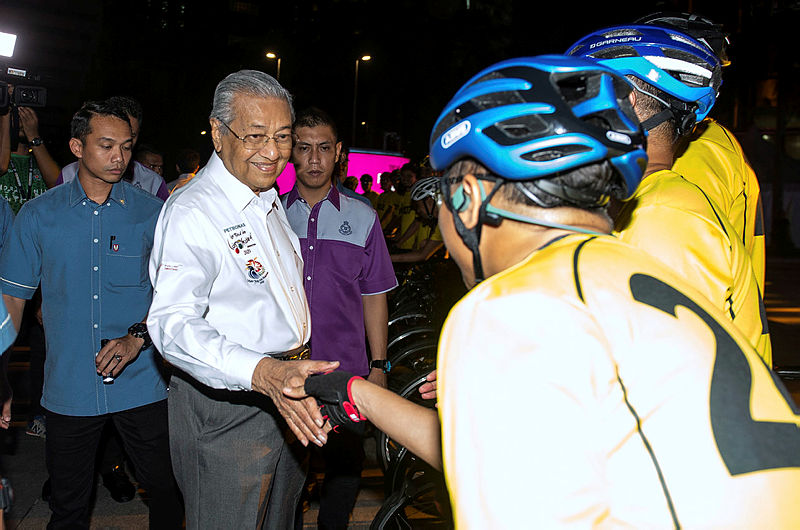 Reflecting on its journey, Mahathir said LTdL has fulfilled much of its original objectives to showcase Malaysia and Langkawi as a tourism destination as well as a sporting hub.

Accepted as being on par with other cycling races in Europe, Mahathir noted that LTdL has attracted many top riders and World Tour and Pro Continental teams throughout the years.

“Since its inception 24 years ago, a total of 232 stages of LTdL have been organised throughout Malaysia.

“As a result, not only are Malaysia and Langkawi now firmly placed in the world’s map as a must-go destination, other districts in Malaysia that the cyclists pedalled through benefited as well. The world sees the Malaysian countryside as much as the well-known towns and cities,” he said in his speech when launching the Petronas LTdL 2020 yesterday.

In addition, the premier also announced that LTdL would return to Sabah and Sarawak after its first and only appearance in 1997.

He said after years of absence, the race through Sabah and Sarawak would add further colour to LTdL with the unique landscapes and people apart from the sense of adventure these two States could offer.

Mahathir said besides seeing future world champions emerging in LTdL, the iconic event has also contributed to producing world-class champions such as Anuar Manan, who became the first Malaysian to win a stage and donned the green jersey (Sprint King) in 2010.

“I believe these success stories have served as an inspiration for many Malaysians. Cycling has become more popular now in Malaysia. In this context, I would like to urge the organiser to tap into this huge interest in LTdL by taking the relevant initiatives to develop cycling as the preferred sport amongst the young,” he said.

The prime minister also commended the organisers for introducing two additional races as part of their silver jubilee celebration and development efforts, namely the Criterium International and Malaysia Classic - 2 new 1-Day races in the UCI (Union Cycliste Internationale) calendar which would make their debut next year.

The Criterium International would be targeted at the Under-23 (U23) category of riders with a UCI elite-racing license, further enhancing Malaysia as the place to discover future cycling champions while the Malaysia Classic, dubbed as the “Race of the Champions” would feature national champions from all over the world.

“Surely this will be a ‘one of a kind’ competition, as it has never been organised anywhere else.

“I trust that both events would strengthen Malaysia’s position as one of the cycling powerhouses in Southeast Asia and provide wider international publicity to Malaysia beyond LTdL,” he said.

Mahathir also welcomed back the race title sponsor – Petronas who is no stranger to the Malaysian sports scene.

“A sincere thank you to all the sponsors for your generosity and we hope the same cooperation would be extended to LTdL in the future,” he added.

Asia’s biggest cycling race which has been upgraded to the Professional Series (ProSeries) staging eight-stage race, is scheduled from Feb 7 to 14, covering a total distance of 1,095.7km across nine states including Sarawak, Terengganu, Pahang, Federal Territories (Putrajaya and Kuala Lumpur), Selangor, Perak, Penang and Kedah. — Bernama

1.Domestic carbon trading to be implemented in phases

5.Sydney braces for more Omicron cases but no lockdown for now