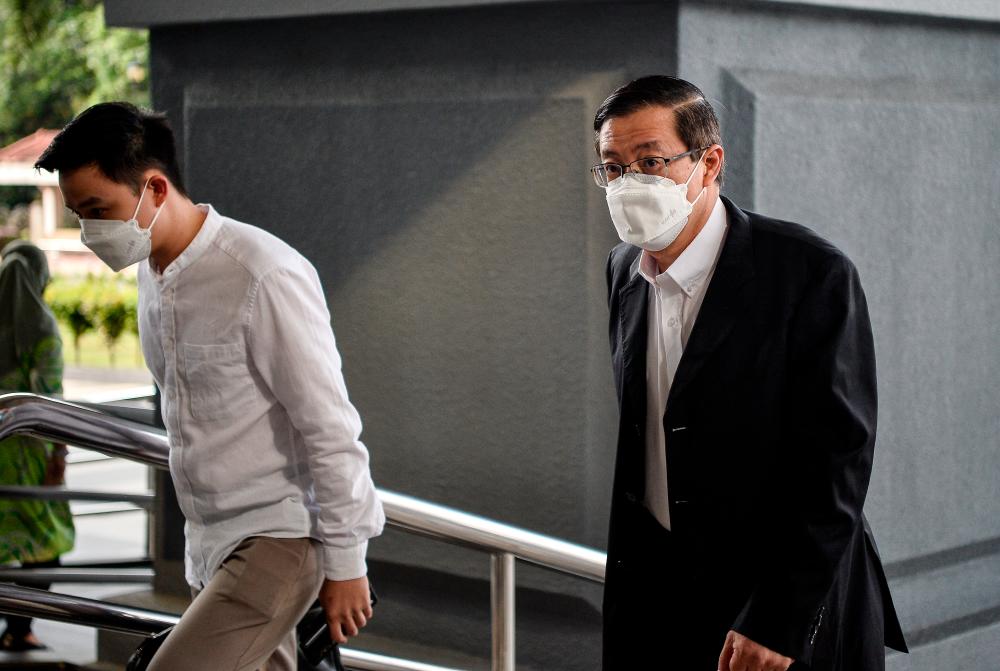 Zarul Ahmad, 62, said he gave RM100,000 to Lim in 2013 as a milestone payment of the preliminary agreement from the profits that the company made in the construction project of main roads and undersea tunnel in Penang.

Zarul Ahmad was reading from his witness statement at the trial of Lim’s corruption case in which he is facing four charges involving the construction of an undersea tunnel and main roads in Penang worth RM6.3 billion.

Zarul Ahmad said he made an appointment with Lim in August 2013 to submit reports regarding the project and to ask for advice and direction from the politician.

He said after discussing with Lim in his office on the 28th floor of Komtar, he produced an A4-sized envelope filled with cash that he handed over to Lim and said ‘This is for you, Sir’.

On the second payment of RM100,000 to Lim, Zarul Ahmad explained that it occurred before the Chinese New Year celebration in January 2014 at his Komtar office.

He told the court that he put RM100,000 cash inside a white envelope, which he gave to Lim after discussing the feasibility study that his company was conducting in connection with the construction project.

“At this stage, my company has been given a letter of award to implement the project. Lim accepted the envelope that I gave him. I was in his office only for a while but he seemed happy after receiving the envelope,” Zarul Ahmad told the court.

Earlier, Zarul Ahmad said Lim did not ask for money from him but he tried to keep his promise to Lim who requested a 10 per cent cut from the profits of the undersea tunnel and main roads projects that were awarded to his company.

“As a businessman, keeping promises is important. All the money that I have was from the working capital fund.

“I received funds from investors such as Ewien Zenith Sdn Bhd (EZCB) managing director, the late Datuk Ewe Swee Kheng. I saved some of it in cash to make contributions to Lim,” he added.

Lim is facing an amended charge of using his position as Penang Chief Minister to receive RM3.3 million bribes to assist Zarul Ahmad‘s company to obtain the construction project valued at RM6,341,383,702, at the Penang Chief Minister’s office on the 28th floor Komtar, George Town between January 2011 to August 2017.

For the second amended charge, Lim was accused of soliciting bribes amounting to 10 per cent of the profits of the company from Zarul Ahmad in appreciation of winning the project and the accused committed the offence near The Garden Hotels, Lingkaran Syed Putra, Mid Valley City, here in March 2011.

Lim is also facing two charges for causing two lots of land worth RM208.8 million belonging to the Penang government to be disposed of to the companies related to the undersea tunnel project.

He was charged with committing the offences at the Penang Land and Mines Office on the 21st floor of Komtar on Feb 17 2015 and March 22 2017. Grants worth RM5.3 mln handed over to 92 non-Muslim houses of worship

Grants worth RM5.3 mln handed over to 92 non-Muslim houses of worship

5.Grants worth RM5.3 mln handed over to 92 non-Muslim houses of worship