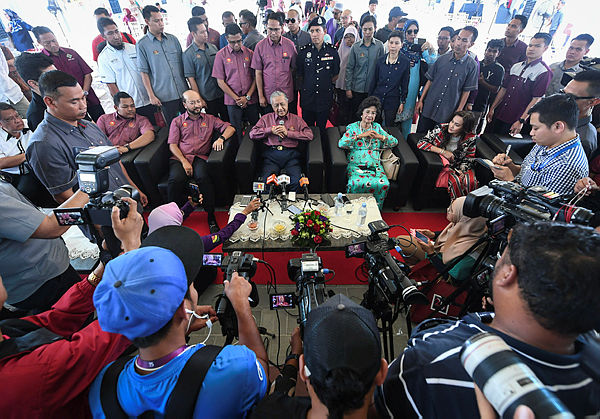 LANGKAWI: The Cabinet is of the opinion that the Langkawi Maritime and Aerospace 2019 (LIMA’19) Exhibition was a success, having drawn huge participation in all its events since last Tuesday.

Prime Minister Tun Dr Mahathir Mohamad said that it also managed to draw thousands of visitors, who had the opportunity to witness various shows during the exhibition.

“In addition, there were business deals (signed) which can contribute to the economic growth of Malaysia,” he told a press conference after attending the Permodalan Kedah Bhd (PKB) silver jubilee celebration and launch of Adya Chenang Hotel, here today.

He said this when asked to comment on the essence of the Cabinet meeting held yesterday.

Dr Mahathir said he hoped that Langkawi would continue to host the biennial event which and benefit the people of the island resort.

“I believe the people of Langkawi will be good hosts to visitors during and after LIMA, that way they will earn huge profits when tourists come to Langkawi,” he said.

The Prime Minister also said there were participants of the exhibition who expressed their desire to invest in Malaysia, particularly in Kedah and Langkawi.

“Some countries admitted to wanting to import more palm oil, but we must also buy their products. Some said that even if Malaysia do not buy anything from them, they are still keen to invest in Kedah and Malaysia, especially Langkawi,” said Dr Mahathir, who is also Langkawi MP.

A total of 406 companies, including 200 foreign firms, mostly involved in defence are took part in LIMA’19, which is being held at the Mahsuri International Exhibition Centre (MIEC) here.

Earlier in his speech, the Prime Minister urged state governments involved in business to do it in a proper manner and according to proper business management practices.

He said that there were business entities set up by governments, including at the federal level, which failed or did not make a profit because of poor management.

“The reason for that is not because the projects were not good, but because the management wasn’t. Good management is very important in all state or federal government businesses,” he said.

The Adya Chenang Hotel is owned by PKB, a Kedah government syariah-compliant company, and offers 128 rooms. It has been operational since Nov 15 last year. — Bernama