Mahathir calls Dong Zong racist for not agreeing with anything 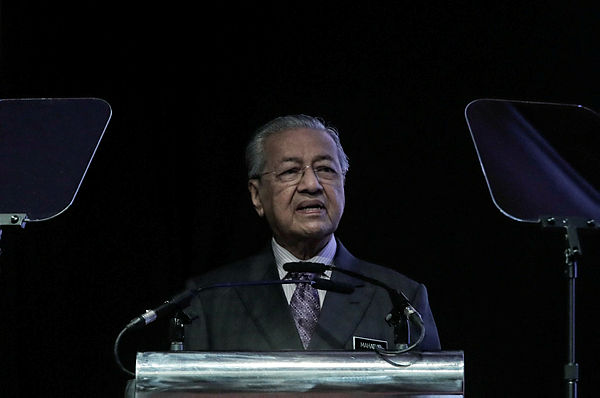 LANGKAWI: Tun Dr Mahathir Mohamad (pix) has described Dong Zong, the United Chinese School Committees’ Association, as racist as it has never agreed with national education policies, including the introduction of Jawi calligraphy in schools.

The prime minister said apart from the Jawi calligraphy or khat issue, the group had also protested against the setting up of a Vision School (Sekolah Wawasan) for fear of Chinese students mixing with other races.

“Dong Zong is racist; we set up a campus in Vision School to put a Sekolah Jenis Kebangsaan (SJK) Cina, a SJK Tamil and a ‘sekolah kebangsaan’ (national school) in one campus, but they were against it.

“They are afraid to let their children mix with Malays, so they did not want it. They are against all (implemented by the government), never agreed with anything,” he told reporters after attending a gathering with the residents of Padang Matsirat in conjunction with the Hari Raya Aidiladha celebration here today.

He was asked to comment on Dong Zong’s move to organise a petition to protest the learning of Jawi calligraphy in vernacular schools.

Elaborating, Dr Mahathir said the decision to introduce khat was made in 2012 by the previous government but the Chinese pressure group did not raise its objection at that time.

He said the present government is practising a more open policy for groups to voice their views compared to the earlier government.

Dr Mahathir also said when the country wanted to achieve independence, the government introduced romanised writing to help non-Malays as it would be difficult for them to learn Jawi.

“Now the Malays have to learn Jawi to read the Quran instead. So, why are we fighting? We have given special consideration in the interest of non-Malays,” he said.

Meanwhile, commenting on a call by Klang MP Charles Santiago who wanted the power of the prime minister in making decisions curbed, Dr Mahathir cynically said he will refer to Charles before making any decision.

“In future, when making a decision, I will ask Charles Santiago; if he did not agree I will not make the decision. Of course, I have to obtain his view; he is on the same level as me,” he said. — Bernama

In slap at China, US praises S. Africa’s detection of new Covid strain

1.Covid-19 test for travellers arriving in S’pore via land VTL from Nov 29