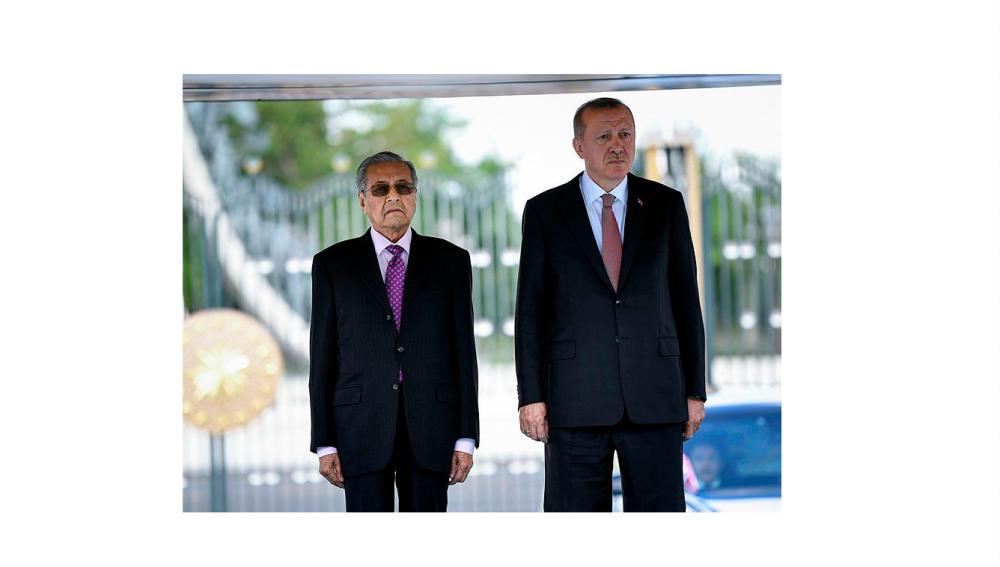 He said the Muslim world today was in a state of turmoil with nothing really substantial being done to tackle the situation.

Speaking at a joint press conference after talks with Turkey President Recep Tayyip Erdogan here, Mahathir pointed out that there was once a great Islamic civilisation but it was no longer the case now.

“Today, we cannot claim to be a great civilisation, we are all oppressed and many of us are very backwards to the point of even not being able to set up the government of our own countries,” he said, adding that Muslim countries should do something to address their weaknesses and their dependence on others.

Mahathir is on a four-day official visit to Turkey.

In this regard, the Prime Minister said there was a need to find out the reasons behind the current state of the Muslim world to be able to prescribe the correct remedy to revive the Islamic civilisation.

“So by working together, countries like Malaysia, Turkey and Pakistan should be able to put our minds and assets together so as to tackle this problem and help resuscitate the Islamic civilisation.”

Earlier, Erdogan presented the Order of the Republic medal to Mahathir in recognition and appreciation of his outstanding efforts to develop Malaysia and also strengthen Malaysia-Turkey bilateral ties.

Mahathir underscored that Muslim countries should strive to be independent and be truly capable of doing everything by themselves.

“I am sure that cooperation between Malaysia and Turkey will help us move in that direction to free the Muslim ummah from being subjugated by others who are not friendly towards us,” he said.

He also hoped that the close ties between the two countries would not only benefit both countries but also the Muslim community at large.

Touching on the situation in Palestine, Mahathir said Malaysia and Turkey shared similar views and it was important to show the world that both countries were concerned with the plight of the Palestinians.

On terrorism, the prime minister said until the reasons behind it were recognised and handled, there would not be an end to the kind of terrorist acts that the world was seeing today.

Mahathir began his official programme in Turkey on Thursday by laying a wreath at the mausoleum of Mustafa Kamal Ataturk, the founder and first president of modern-day Turkey, at Anitkabir here.

Then, he visited Turkish Aerospace Industries (TAI), which is Turkey’s centre of technology in design, development, modernisation, manufacturing, integration and life cycle support of integrated aerospace systems, from fixed and rotary wing air platforms to UAVs and satellites.

After that he was conferred an Honorary Doctorate of Political Sciences and Public Administration by Ankara Yildirim Beyazit University, held at the Turkish Higher Education Council here.

Prime Minister then received an official welcome at the Presidential Complex, followed a four-eyed meeting with Erdogan and a Malaysia-Turkey delegation meeting.

In the evening, the Turkish President hosted an official dinner in honour of the Malaysian prime minister, who was accompanied on the visit by his wife Tun Dr Siti Hasmah Mohd Ali and several ministers. — Bernama