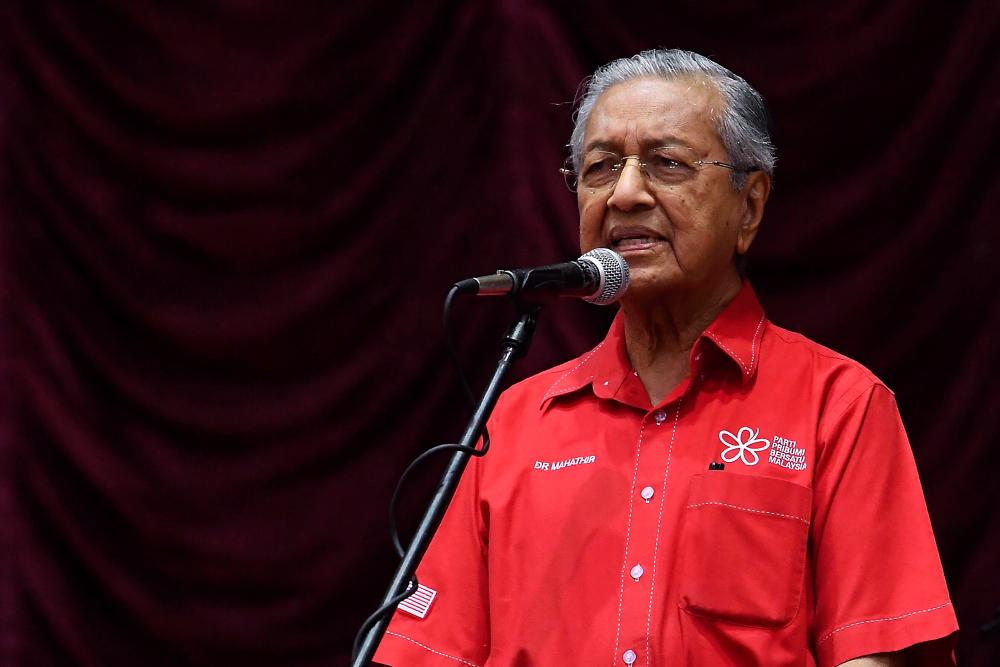 He said this when quashing claims the previous administration was dominated by DAP.

The former prime minister said DAP only had six federal ministers and its secretary-general Lim Guan Eng, who was the Finance Minister, was fully cooperative with him.

If one examines the previous Cabinet, many of the PH parties only had an average of six to seven Cabinet members each as it reflected the aspiration for political equation and tolerance, said the Langkawi MP.

Mahathir said this was reflected with PPBM which had six ministers even though it was the party with the smallest number of MPs (13) in PH.

There were 28 ministers and 24 deputies in the PH cabinet.

“In fact, Lim would often consult me even for matters which do not require my attention. He was the one reaching out to me for help,“ said Mahathir during a briefing for PPBM Langkawi division members at the Langkawi Lagoon Resort here.

“It is a pack of lies that I was subservient to DAP or a lackey of them.”

The truth is, Datuk Seri Najib Abdul Razak carefully crafted a perception that DAP was anti-Malay or that Mahathir was a lackey to the party to create animosity among the community towards PH, added Mahathir.

The outcome is for all to see, which was the collapse of the PH government.

Mahathir said that PH was an honourable coalition as the underlying struggle was to bring the country back onto the right path after decades of abuse.

This was evident when PKR which was initially offered the post of the prime minister, declined it to honour the promise made to Mahathir for the latter to assume the post.

Recalling the torrid week which began on Feb 21 at the PH presidential council meeting, Mahathir said he only asked for more time to digest what was been proposed since the majority of the MPs including Najib had signed statutory declarations supporting him as prime minister.

The Feb 21 meeting was slated to be the one when Mahathir would announce the transition of power to Datuk Seri Anwar Ibrahim.

“Also during the meeting, none of what was alleged to have happened occurred. Nobody asked me to leave during a certain period. I was allowed to decide when should I leave,“ said Mahathir.

He reiterated that he resigned as prime minister and PPBM chairman initially because he had lost the support of his party.

But when support returned hours later from PH and segments of PPBM, he decided to backtrack and continue his struggle.

He claims he was denied at the last juncture when the Yang di-Pertuan Agong refused to see him despite having proclaimed that he has the support from 114 MPs.

“The reason I asked for more time when I was pestered to leave PH is that I cannot accept Umno leaders returning en bloc. If their good leaders resigned and joined us, I could have accepted it,“ added Mahathir.

But Tan Sri Muhyiddin Yassin could not wait as he was fearful that Umno leaders, including those facing trials, would abandon the proposition of forming the new bloc of Perikatan Nasional (PN), he said.

Asked to forecast the future for the community following the collapse of his government, Mahathir said that it was bleak simply because the Malays always want to take the easy way out instead of slogging and working harder.

He said that his desire to return was simply driven by a need to help the Malays and the country as a whole return to the path of progress and prosperity.