Mahathir questions if Islamic gathering was for religion or politics 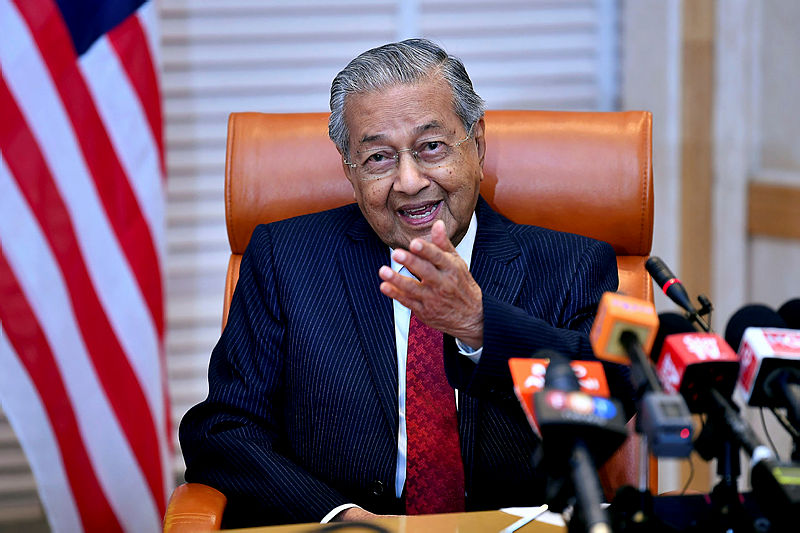 KUALA LUMPUR: Prime Minister Tun Dr Mahathir Mohamad (pix) has questioned whether a gathering by Muslims in the city on Saturday was to defend the sanctity of Islam and the Constitution or to draw support for certain political parties.

“I welcome gatherings by Muslims aimed at defending the sanctity of Islam and the Constitution, I fully support these noble aims.

“But I am wondering whether these were the real objectives or aimed at getting support for certain political parties,” he said in his latest posting on his blog chedet.cc titled Mendaulatkan Islam last night.

Mahathir said the gathering was reported by the media as one to remind the Government on the status of Islam but the leaders who spoke at it were from Umno and PAS.

“If it was to defend Islam, by right it should not have been limited to certain political parties only. The alliance of these parties do not reflect Islamic solidarity. In fact, it divides Muslims in Malaysia,” he said.

Mahathir said PAS had earlier claimed Umno members were kafir (infidels) for cooperating with infidels and that ‘this allegation is yet to be retracted’.

He said the Malays were all Muslims and were including the Sunni (Sunnah Wal Jamaah) sect led by Imam Shafie.

“There was no difference of opinion or understanding on Islam (by Malays) since ancient times. They profoundly split only when PAS was formed and claimed that Umno members were kafir for cooperating with the infidels,” he said.

He said so obsessed was PAS with this that some people deemed their parents kafir if they joined Umno, claiming Umno people’s marriages were not valid and they should remarry and that even cattle or poultry slaughtered by Umno members was not halal and cannot be eaten by PAS members.

‘’For PAS, a person who does not join PAS is an infidel. According to PAS, only PAS members are Muslims. Indeed, Muslims seeking asylum in non-Muslim countries have become infidels,’’ he said.

Mahathir also questioned how PAS with Umno had the right to claim that their gathering pictured the solidarity of Muslims for the sovereignty of Islam.

‘’There are people with posts, who are silent on the allegations by PAS and Amanat Hadi,’’ he said.

He said there were Muslims who purportedly wanted to practise Islamic teachings but their focus was on small matters which had elements of politics.

“Now we find Malaysian Muslims joining wars among other Muslims. They are willing to kill other Muslims, something that is prohibited by Islam. There is no movement by Muslims who want to uphold Islam who have talked about the sins of killing, especially killing Muslims,” he said.

‘What’s worse is shouting the name of Allah during the gathering to strengthen the party’s divide and rule politics. Allah’s name is used to justify the rejection of Islamic teachings that denounce other Muslims without any apparent reason. Committing sin by doing things prohibited by religion should not be done in the name of Allah, “ he said.

Mahathir said Islam prohibits theft, but PAS negotiated and cooperated with the previous administration which is known to the world as a government of thieves.

“Now PAS continues to work with the people rejected by society for stealing,” he said.

Mahathir said the Malays often accuse that this government does not have high regard for Islam but on the contrary Muslim delegations from other Muslim countries claim that Malaysia is role model of an Islamic state, and look up to Malaysia as an Islamic country.

“They have expressed their desire to see their countries become like Malaysia, even saying that though their population is 100% Muslim they could not govern and stabilise their countries, far from developing them,“ he said.

He said countries with 100% Muslim population were often hostile towards each other, killing and going to war, causing chaos forcing their citizens to migrate to non-Muslim countries.

“Ethnic differences, disparity in Islamic teachings, political differences, leadership differences have disrupted peace. Often they are forced to abide by the will of a non-Muslim major power. Some are also influenced by Jews, whether directly or indirectly,“ he said

“Indeed, the accusations against the government are not because Islam is not being revered but merely due to political reasons. In this way the holy religion of Islam gets a bad name because of non-religious interests.

“Once again I would like to ask Haji Hadi ( PAS president Datuk Seri Abdul Hadi Awang ) and PAS whether they still do not recognise my Islam and the Islam of those who are not members or supporters of PAS,“ he added. — Bernama

5.Quartararo aiming to bounce back in Misano