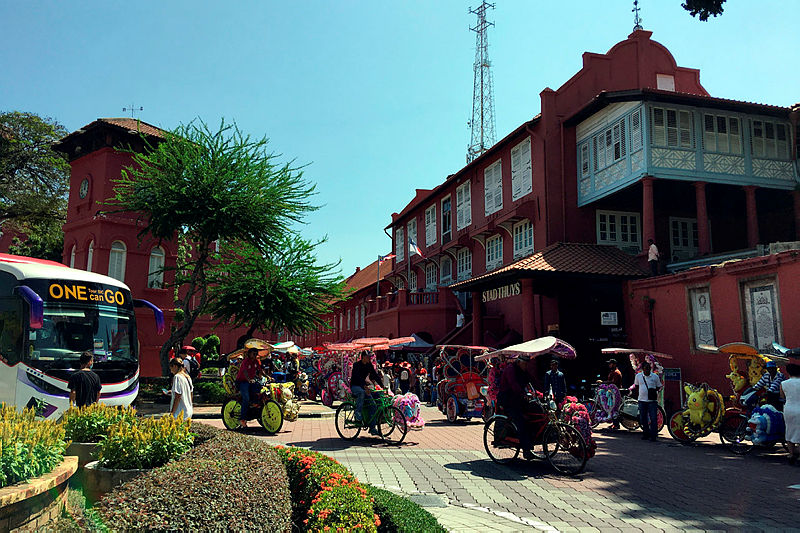 MALACCA: The 134-year-old iconic red clock tower, located at Dutch Square in Stadthuys here, is one of the main tourist draws.

The chief guard of the clock tower, Fadlina Mohni, 43, said as early as 8 am, local and foreign tourists gather around the 50 feet high clock tower, built in 1886, to take pictures for remembrance sake.

“More commonly known as the Tan Beng Swee Clock Tower, it was built about 61 years after the Dutch surrendered Malacca to the British and it is actually not as old as the Dutch colonial administration building Stadthuys which was built in 1650.

“Now a hundred years old, the clock was never allowed to stop because over the years it has been carefully cleaned, serviced and every component tested to ensure it continues to tick for another 134 years or longer,” he told Bernama at the Stadthuys building here.

Fadlina, who is also the Senior Electrical Engineer, Department of Engineering, Historical Malacca City Council (MBMB) said even more interesting is that the clock tower was also a symbol of family love because it was built by a son who wanted to fulfill his father’s request.

She said according to history, the clock tower was built by Tan Jiak Kim, a Peranakan Chinese philanthropist who wanted to fulfill the wishes of his late father Tan Beng Swee who dreamed of a clock tower in the heart of Malacca when he was still alive.

“After Tan Beng Swee’s death, the clock tower was built in the Stadthuys building near Queen Victoria’s Fountain, the Cheng Ho Cultural Museum and Christ Church. Each of the four clock faces with a diameter of 34.5cm featuring Roman numerals were specially imported from England.

“Then in 1982, the four clocks were replaced with ones from Japan’s Seiko brand, much to the chagrin of local senior citizens around Malacca who remembered the harsh treatment and sufferings under the Japanese Occupation,” she said.

Fadlina, who oversees the clock tower, also known as the Bandar Hilir Red Clock Tower, has for the past 17 years hoped that the historic clock tower would continue to be maintained and preserved so that the tourism product could be enjoyed by future generations.

Meanwhile, according to Fadlina’s assistant Mohd Suhaimi Idris, 36, an assistant Electrical and Facilities engineer at MBMB, the 24-volt voltage clock is also equipped with a global positioning system (GPS), to provide the accurate time.

“In collaboration with the Malacca Health Department we installed a predatory bird sound system which plays the sound for 45-seconds with one minute long intervals to prevent crows and pigeons from perching and defecating around the clock tower,” he said.

The hourly striking clock tower is among the core zones recognised as a Unesco World Heritage Site and Malacca as one of the states selected to boost Visit Malaysia 2020 (VM 2020). — Bernama

Kelantan records 808 fatalities due to Covid-19 as of September

1.Kelantan records 808 fatalities due to Covid-19 as of September

4.Will PM appoint another adviser on inflation, LGE asks