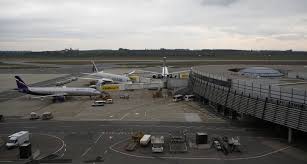 “The flux of passengers will come through domestic flights and international flights from other countries that will make up the huge traffic movements,“ he told Bernama.

Asked on steps taken to curb the spread of coronavirus, Mohd Arif said the airports had already placed thermal scanners at the arrival halls prior to the outbreak.

Several airlines such as Malindo Air and AirAsia have suspended their international flights from the affected areas.

In light of the recent health situation, all AirAsia flights from Kota Kinabalu, Bangkok and Phuket to Wuhan, China, are temporarily cancelled until Jan 28, 2020.

Meanwhile, Mohd Arif said in catering to the surge in the passenger traffic movements, the airport operator and other agencies at the airport would be placing more resources on the ground.

Malaysia Airports is working closely with various authorities, including the police, to ensure passengers travelling through KLIA and KLIA2 will experience a smooth journey during the upcoming festive season.

“Passengers are advised to arrive early at the airport by three hours to allow for better check-in time. The airports also provide facilities like web check-in and check-in kiosks to reduce passengers’ travel time.

“The public is also advised to utilise public transport as much as possible in getting to the airport. It only takes less than 30 minutes by Express Rail Link (ERL),“ he added.

Mohd Ariff said apart from placing more resources on the ground during this period, the airports would also be reinforcing many measures such as managing the increase in traffic flow at the kerbside for drop-offs and pick-ups.

He said the parking area had 500 bays and specially designated lots for drivers with disabilities, and users could easily access the terminal from the car park via the link bridge at Sama-Sama Hotel. — Bernama