Malaysia has much to contribute in promoting peace, understanding: Baroness Scotland 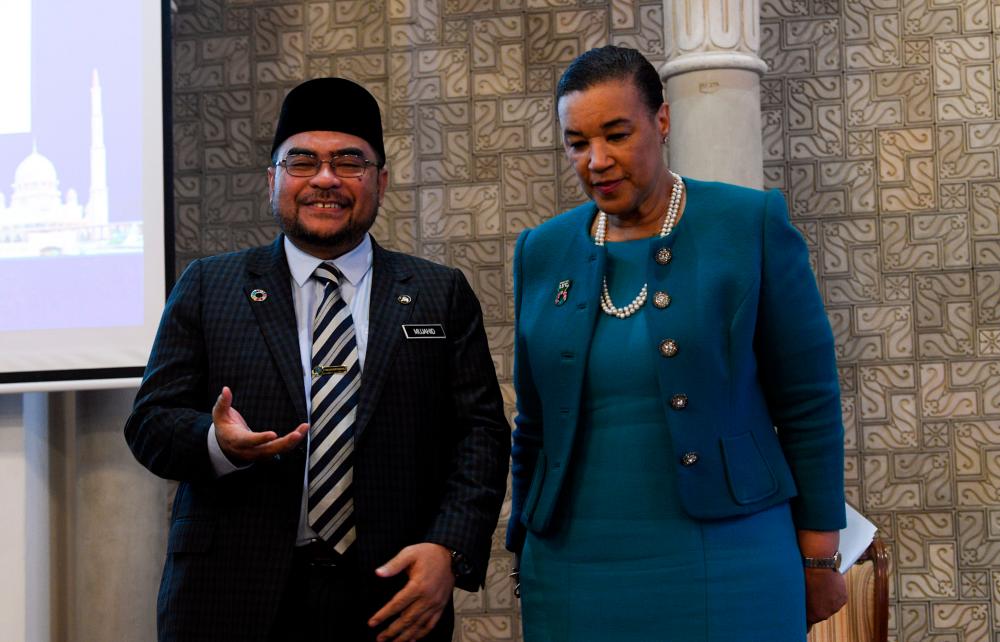 Minister in the Prime Minister’s Department Datuk Seri Dr Mujahid Yusof Rawa with Commonwealth secretary-general Patricia Scotland during a seminar on ‘Faith in the Commonwealth’ at the International Institute of Islamic Civilisation and the Malay World in Kuala Lumpur today. - Bernama

KUALA LUMPUR: Multiethnic and multireligious Malaysia has much to offer to the international community in terms of fostering greater peace and understanding among communities and nations, said Commonwealth secretary-general, Baroness Patricia Scotland.

She noted that the Malaysian government itself has committed to inculcating the values of peace and mercy (rahmah) and showing that Islam is a religion of peace that embraces all mankind.

“Malaysia, as a much-loved member of our Commonwealth family, can give a very blessed gift to the whole world because Malaysia is the embodiment of what peace and peaceful coexistence look like.”

Baroness Scotland said this when addressing the ‘Faith in the Commonwealth - Commonwealth Call For Peace, Understanding and Rahmah (Mercy)’ forum at the International Institute of Islamic Thought and Civilisation, International Islamic University Malaysia (ISTAC-IIUM), here today.

She also spoke of the need for deeper understanding of the contribution that belief systems - whether they be philosophical or faith-based - can make towards building mutual respect among nations and communities as well as shaping a world that is not just equitable but also more inclusive.

“And the pledge that Malaysia is making to be one of the leaders in this journey towards peace and understanding is a pledge that I celebrate and applaud,” the 54-member grouping’s top official said.

Alluding to last year’s deadly attacks against religious targets in Christchurch, New Zealand and Sri Lanka’s capital Colombo, Baroness Scotland underscored the need to speak out against those who attempt to spread hatred and create divisions.

“It drove the Commonwealth family together. We knew that we could not stand silent while these harbingers of hate did their work,” she said.

Baroness Scotland noted that a sizeable number of Commonwealth’s 2.4 billion people are Muslim and that 1.8 billion are those under the age of 30.

“So this is a young Commonwealth, a Commonwealth which needs to know and love each other and needs to share (with one another),” she said.

In his speech, Mujahid explained that the government has agreed to implement what is called the ‘Rahmatan Lil Alamin’ or ‘Compassionate Islam’ as its new policy, based on the principles of ‘RAHMAH’ - amicable (ramah), peaceful (aman), harmonious (harmoni), genial (mesra), universal (alami) and respectful (hormat).

“The Rahmatan Lil Alamin principle, as we find in the study of Islamic scholars, offers a solution to the increasingly complex and pressing global problems,” he said, adding that academic discussions on this concept will lead to solutions to current challenges which hamper the existence of multiracial societies.

This concept, he said, can be understood as a universal value which can be applied to every race and religion. - Bernama