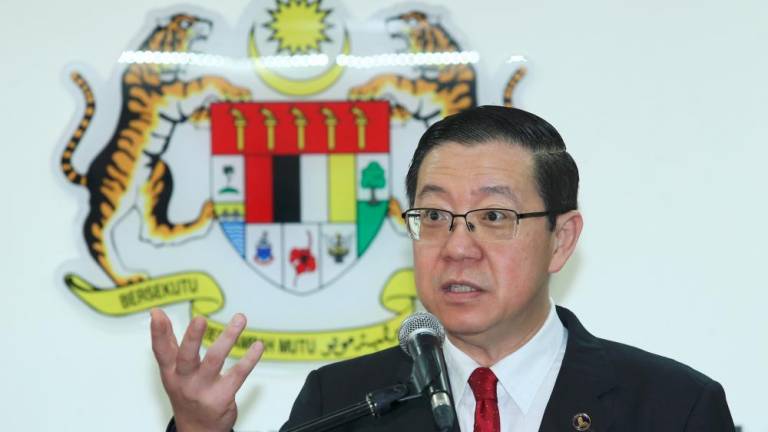 KUALA LUMPUR: Finance Minister Lim Guan Eng is confident that Malaysia is on the right track to strengthen its economy and fiscal status by 2021, leading the way to regaining its position as an Asian Tiger.

The government intends to reduce the current debt and liabilities of RM1.087 trillion or 80.3% of the GDP in the course of this period to 65% through the renegotiation of mega-projects such as the mass rapid transit.

Soon after his appointment to one of the toughest jobs in the federal government, Lim announced that government debt and liabilities had exceeded RM1 trillion, a figure that fuelled market anxiety and raised the prospect of a credit-rating downgrade.

“After a six-seven month effort by the government, the debts and liabilities were reduced to RM1.07 billion or a reduction of RM17 million.

“But, from the aspect of a percentage to the GDP, it was by 5.5 % from 80.3% to 74.8%,“ he said in a selected media interview ahead of the first year anniversary of the Pakatan Harapan coalition’s historic win in the 14th General Election on May 9 of last year.

Lim also addressed the importance of transparency being implemented by the government, especially in addressing scandals such as 1Malaysia Development Bhd (1MDB), Tabung Haji and Felda, while also combating the corrupt practices by the previous administration.

The finance minister said the government estimated about RM805 million in savings had been made through the renegotiation of infrastructure projects, while a projection of RM4 billion likely raised for the Sales and Services Tax (SST) is to be allocated for critical ministries and the people.

“Seen from the point of performance, although we faced much pressure from the aspect of finance, Malaysia has not become bankrupt as we feared, when the Goods and Services Tax (GST) was abolished,” he added.

In other developments, Lim said the Pakatan Harapan government had begun the process of repaying tax refund arrears of RM37 billion left by the previous government.

The process started in January this year and will be completed by October.

He also pointed out that inflation is being well managed at 0.4% in February and international rating agencies had also maintained their A3 ratings for Malaysia.

Malaysia’s foreign direct investments (FDIs) also increased by 48% in 2018, while exports and the current account have also been in positive territory.

The country recorded a 48% increase in approved FDIs across all sectors at RM80.5 billion last year.

“Although we faced financial problems following the 1MDB scandal, the confidence of foreign investors or foreign funds remained strong and they also maintained the level of Malaysia’s credit rating.

“So, this is a test that Malaysia passed in terms of managing the economy and the fiscal position,” Lim said.

He also said that Malaysia’s economy was still developing steadily with the economic fundamentals strong, alongside savings from renegotiations undertaken for infrastructure projects.

The savings were used to save Tabung Haji and Felda, which needed an injection of RM17.8 billion and RM6.23 billion, respectively.

“It also left Malaysia pressured, as originally, we thought the savings could be used to repay the 1MDB debts and such. But, it seems now, we have to still find our own sources to repay it.”

He noted that the revival of the Bandar Malaysia and East Coast Rail Link (ECRL) projects were in the preliminary stage and the ministry was awaiting complete reports related to both.

“We look at (the revival of the projects as) national interest. Various aspects were considered, including the ECRL deal involving an agreement between the government and China, which is Malaysia’s largest trading partner.

“The ECRL is a project which if discontinued, meant compensation had to be paid and involved a sum of money that would reach billions of ringgit,“ Lim said. - Bernama