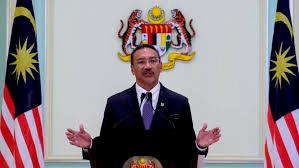 KUALA LUMPUR: Malaysia has reaffirmed its commitment to the Nuclear Non-Proliferation Treaty (NPT) in bringing States Parties together towards achieving the goal of a world free of nuclear weapons.

Minister of Foreign Affairs Datuk Seri Hishammuddin Hussein (pix) said despite the challenging security environment and the current greatest challenge of Covid-19, the persistence in pursuing nuclear disarmament must remain.

“As Chair of Main Committee I on Nuclear Disarmament for the 2020 NPT Review Conference, Malaysia hopes that the Review Conference, and its earliest convening at a date to be agreed upon, will be successful in bringing States Parties together towards achieving the goal of a world free of nuclear weapons,“ he said in a statement today.

Hishammuddin read out the statement via video recording at a high-level meeting to commemorate and promote International Day for the Total Elimination of Nuclear Weapons in New York.

He said that the status quo of a world with nuclear weapons was unacceptable and unsustainable and the responsibility was on all to realise the objective of a nuclear weapon-free world.

The international law and multilateral approaches to disarmament need to be strengthened, he said, adding that the security for all can only be guaranteed by the total elimination of nuclear weapons.

“In this respect, I am pleased to announce that Malaysia has recently deposited its instrument of ratification of the Treaty on the Prohibition of Nuclear Weapons (TPNW).

“We are convinced that the entry into force of the treaty strengthens the global norms against nuclear weapons, sends a clear message that nuclear weapons are categorically unacceptable and complements the existing international legal instruments relating to nuclear disarmament and non-proliferation,“ he said.

He said the NPT remains the cornerstone of the international nuclear disarmament and non-proliferation architecture.

“The NPT and the TPNW can coexist, and the latter gives pathways for nuclear possessing states to become party,“ he said.-Bernama