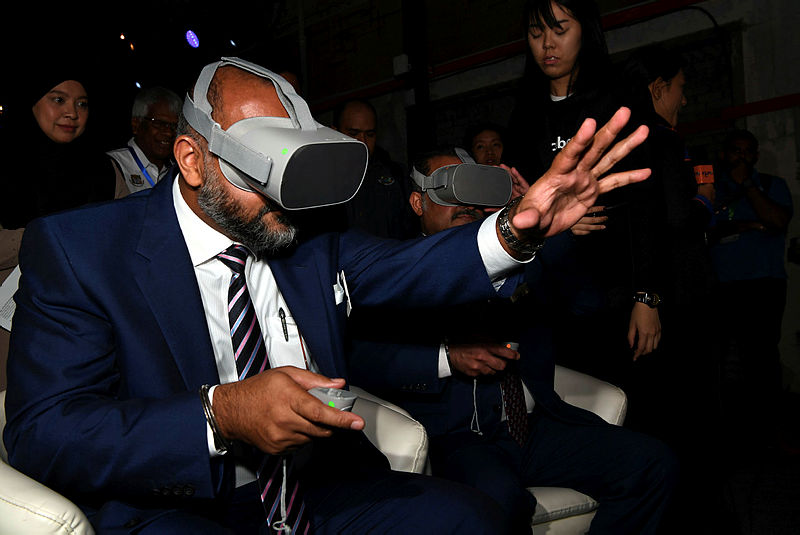 Minister of Communications and Multimedia Gobind Singh Deo tried a Virtual Reality application at the launch of YTL Communication and Facebook’s Terragraph market pilot first in Asia, on Feb 18, 2019. — Bernama

GEORGE TOWN: Malaysia is the second country in the world after Hungary to run trials for Terragraph, a new wireless technology, Minister of Communications and Multimedia Gobind Singh Deo said today.

He said the Terragraph pilot project was timely as it was in line with the National Fiberisation and Connectivity Plan (NFCP) that aims to solve a common urban problem where demand for high-speed broadband is high but access is lacking.

“Even though the NFCP is a fibre-first plan, it is technology agnostic. This means we are open to any technology to solve connectivity problems, including Terragraph technology.

“We must find solutions for these problems; our cities have insufficient fibre coverage, and we need to roll out high-speed broadband access in the shortest time possible,“ he said in his speech at the launch of YTL Communication and Facebook’s Terragraph market pilot first in Asia, here.

Commencing on March 1, the six-month-long market pilot would include the provision of public WiFi and fixed wireless access that could potentially solve the challenges faced in urban areas with rising bandwidth per square kilometre, legacy copper infrastructure, costly fibre optic, cable deployment and limited spectrum at lower frequencies.

At a press conference later, Gobind said the ministry is open to any type of technology which would be able to assist in solving connectivity problems in the country.

He said the ministry needs to find the best solution to deal with the connectivity problem and is committed to providing an affordable quality speed of broadband to the public.

Gobind said the ministry was also in the process of coming out with criteria that could establish a minimum standard for different aspects of a service provider, such as minimum speed.

“These are things that I have told the Malaysian Communications and Multimedia Commission (MCMC) that they need to look at. I’ve said in the past, we are looking at (a speed of) at least 30 Mbps. I think that is quite reasonable, but we have not actually officially standardised it yet.

“But I can now say this very clearly to all telcos. We are coming out with the minimum standard, and we expect them to comply. I think this is the standard that we must actually establish, and we must make sure that we keep up to this standard,“ he said.