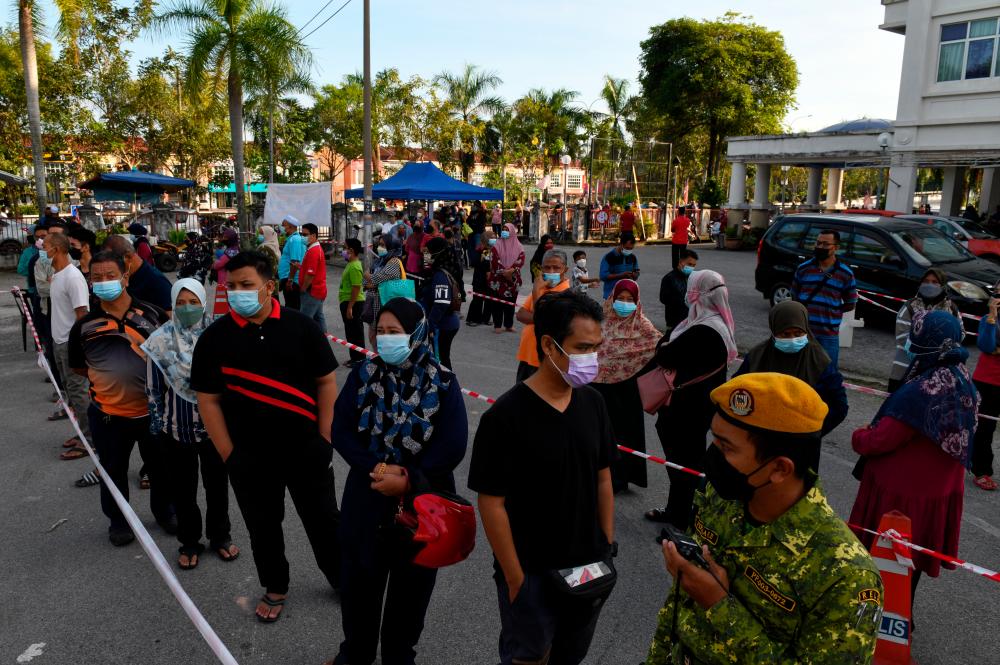 KUALA LUMPUR: The #Keluarga Malaysia Sales initiative implemented by the government in all 222 parliamentary constituencies which offered prices lower than the market continued to receive a positive reaction from the people.

The programme which started on Saturday (Dec 4) was described by most people as a good effort to help those affected by the current increase in the price of goods, besides helping to save on expenses.

In PENANG, home furnishings trader, Tan Teoh Joo, 47, when met during the programme held the Kepala Batas parliamentary constituency said that the prices of chicken, beef and eggs offered were reasonable and people-friendly.

‘Ulam’ trader who is also a person with disabilities (PwD) Ishak Hussin, 70, hopes that it can be implemented every week instead of twice a month to help ease the burden of the B40 group.

“It would be great if it can be held every week because the price of goods is going up. (The government) can help the people, especially the B40 group, including the disabled like me,“ he said.

In KEDAH, restaurant operator, Siti Doyah Din, 57, took advantage of the opportunity by shopping at the programme held at Padang Awam Desa Keda, Pokok Sena to save on business operating costs.

“I (came to) buy items to make stocks such as red chillies which are sold at RM13 per kilogramme compared to RM20 per kilogramme elsewhere and some types of vegetables which we know are increasing in price but cheap here.

“I came here and I have been able to save between 20 and 30 per cent and I hope this kind of programme can be continued to help the people who are burdened by the rising cost of living at this time,“ she said.

Housewife, Siti Fatimah Osman, 42, hoped that more traders and wholesalers would participate in the programme, thus providing more choices of quality and cheaper goods to consumers.

In MELAKA, laundry shop assistant, Noorisah Ramli, 32, suggested that more products be sold at the programme.

“I notice that most of the items sold are basic necessities like packet oil, bread, rice, vermicelli, eggs, chicken and vegetables...maybe in the future more products can be offered to consumers,“ she said.

A college staff, Mustafa Jaahafar, 58, did not miss the opportunity by attending the programme early to get basic necessities at cheap prices.

“Thank God, the price of items sold is cheaper than in the market or in the grocery store that I usually buy and today I can save a little on kitchen expenses. Worth spending here and I hope it can be continued to help the less affluent people,“ he said.

Meanwhile, in NEGERI SEMBILAN, Ministry of Domestic Trade and Consumer Affairs (KPDNHEP) secretary-general Datuk Seri Hasnol Zam Zam Ahmad when met in Seremban assured the people there was an adequate supply of packet cooking oil in the country.

“We have appointed distributors and manufacturers throughout the country according to the quota set to meet the needs of each resident, there is only a time when there is a little disruption, especially during the Covid-19 pandemic.

“Due to the Covid-19 cases involving workers and distributors, sometimes the factory has to suspend operations temporarily,“ he said.

Last Thursday, Prime Minister Datuk Seri Ismail Sabri Yaakob announced that the government would organise the #Keluarga Malaysia Sales programme in all 222 parliamentary constituencies simultaneously starting today to ease the burden of the people following the current hike in prices of goods.

According to the prime minister, at the initial stage, the programme, which offers daily necessities at between 20 and 50 per cent cheaper, is targeted to be held twice a month focusing on areas with large populations from the B40 and M40 groups.-Bernama