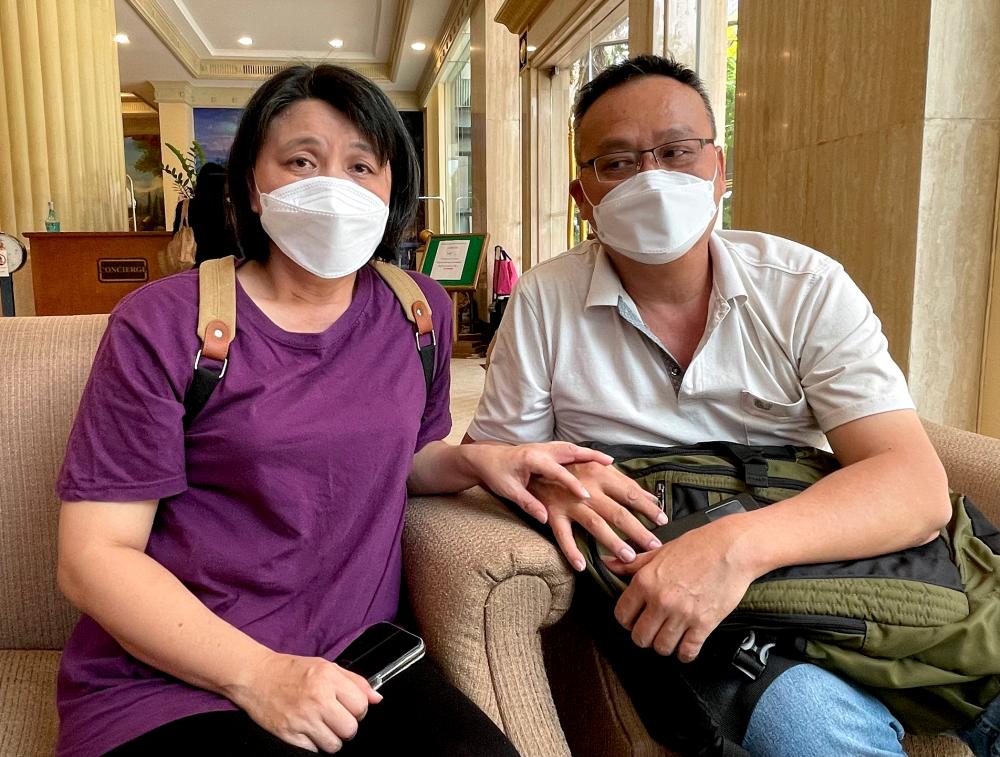 BANGKOK, Sept 4 -- Goi Chee Kong and his wife from Ipoh, Perak when met in Bangkok. The Malaysian husband and wife who travelled to Bangkok to look for their missing son was left heartbroken to find out their eldest child has passed away on May 11 at Mae Sot Hospital near the Thailand-Myanmar border. - BERNAMAPIX

BANGKOK: A Malaysian husband and wife who travelled to Bangkok to look for their missing son was heartbroken upon finding out their son has passed away on May 11 at Mae Sot Hospital near the Thailand-Myanmar border.

He was believed to have been trafficked into Myawaddy in south-eastern Myanmar and forced to work for the syndicate.

The couple travelled to Bangkok on August 30 and were scheduled to fly to Mae Sot the following day to meet their son.

“We were told my son was ill and was receiving treatment at the hospital. Therefore, my wife and I travelled to Bangkok, hoping to bring him back to Malaysia for treatment.

“However, we were informed he had died at 2 am on May 11. Doctor believed my son was abused before he was left at the hospital for treatment on April 11,” he told Bernama when met here.

Chee Kong said his son was admitted to the hospital’s ICU unit under a fake name and passport number.

Due to his son’s fake identity, he said the hospital could not reach the embassy and family to discuss on his health condition and treatment.

“Without further medical treatment, he passed away a month later. His remain was buried at a cemetery in Si Racha in Chonburi province,” he said.

To bring closure to the family, Chee Kong said he and his wife hope to bring their son’s ashes home as soon as possible.

However, he was informed by a non-governmental organisation that arranged his son’s burial services in May to settle the outstanding hospital bills of about RM40,000 before the family could obtain a death certificate to exhume the body for DNA testing and cremation.

With the assistance of Teruntum Assemblyman Sim Chon Siang who is in Bangkok, a fundraising campaign was launched on Friday.

In about 22 hours, the family had collected RM50,000 from generous members of the public.

Accompanying the family to Mae Sot, Sim said the family would settle the hospital bills on Monday and to obtain the death certificate and permission to exhume the body at the burial site at Si Racha in Chonburi (about120 km southeast of Bangkok) as soon as possible.

“We hope to bring the ashes back to Malaysia on Thursday. We hope everything go smoothly,” Sim said.

Zhan Feng, a final year student of the Institute of Teacher Education (IPG), travelled to Bangkok for a holiday on January 19 to meet a friend he had met on social media.

Zhan Feng promised to return home to celebrate his mother’s birthday on Feb 5. However, he did not show up. Two days later, his father lodged a missing person report.

On March 31, Zhan Feng called the parent and informed them that he was in Mae Sot in Tak Province and he needed RM80,000 for medical treatment.

“During the conversation, we noticed something unusual. We believed he was monitored and threatened. He was unusually quiet. He also apologised for not able to return home. He promised will return home a year later... We have not heard from him since then,” Chee Kong said.

After the telephone conversation, he believed his son was a job scam victim, lodged a police report on April 2.

He advised job seekers to not fall victim to lucrative oversea job offers. 4.X44 Vida Carbon Racing Wins Extreme E Round At Copper Mine In Chile