Malaysian to be youngest student at Royal College of Surgeons 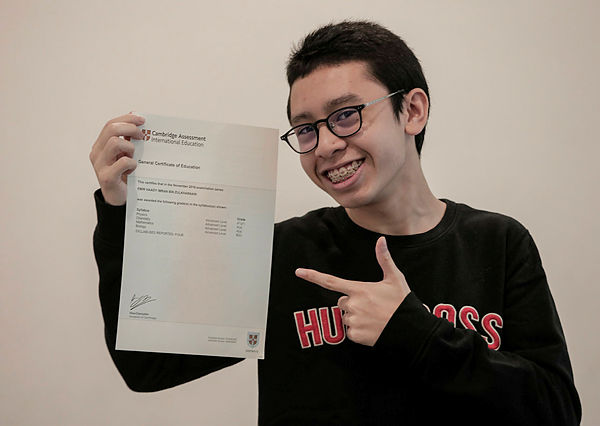 PETALING JAYA: Emir Haady Imran Zulkharnain (pix), 16, will be the youngest student at the Royal College of Surgeons (RCSI) in Dublin when the academic year starts in September.

Apart from accomplishing the feat, the young whizkid said he had just 10 months to study before taking the exam.

Good grades saw this boy genius doing his A-levels at 15, attaining an A each in Chemistry and Math, and an A+ for Physics.

“I can’t see myself doing life any other way than by being a doctor,” Emir Haady, the youngest of four siblings, said in an interview with theSun.

He said his desire to study medicine stemmed from family influence and a deep passion for the discipline.

“It’s a combination of both ... I initially wanted to become an astronaut, but as I grew older, at 11, I started to like medicine a lot.

“My father is doing just that. He works very hard and loves what he does. And I would like to emulate him.”

Emir Haady and his father volunteer at the Kelana Jaya mosque and recalls the time when free consultation was offered to the public.

He also remembered his mother, along with other psychiatrists, who were also on hand to provide consultation.

It was there that he observed the lives of others, their hardships and challenges.

He said it was this realisation that ignited his passion to become a surgeon.

“The heart just fascinates me – how it works – and I just want to do what I love which is to become a heart surgeon,” said the teen who was intrigued when learning about the heart during biology class.

“He absorbs whatever he is taught, he learns fast and he is also very obedient,” she said.

“I am not one of those mothers who needs to use a cane. I allow my children to learn on their own.

“In fact, Haady plays a lot. He enjoys an occasional game of soccer or swimming and he’s good at board games and computer games. If we (the family) play with him, he’s usually the champ.”

Two years ago, Chan Hao Shan, who was then a 19-year-old final year medical student from Taylor’s University, graduated with a Bachelor of Medicine, Bachelor of Surgery (MBBS).

She took two months to finish the Form 1 and Form 2 syllabus, and another two months to do Form 3 and O-levels. All in all, she completed her secondary school studies within a year. M’sia to have one registered counsellor to every 500 people: Rina