Many patients on Methadone therapy returning to drug habit -Expert 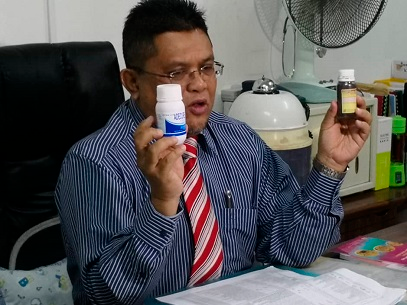 KAJANG: Movement controls imposed nationwide since last year have had a major impact on the rehabilitation of drug addicts, particularly those on the methadone replacement therapy (MRT), according to a drug addiction expert.

Dr Mohd Khafidz Mohd Ishak (pix), who is also president of Persatuan Insaf Murni Malaysia – an organisation dedicated to eradicating drug abuse and helping former addicts to improve their quality of life – said in the 21 years he has been involved in providing treatment to addicts, the Movement Control Order (MCO) and Enhanced MCO periods have proven to be the most challenging.

This is because more than 50 percent of his patients who were not able to get their treatments during these periods due to certain constraints fell prey to the destructive habit again.

“This is based on the attendance records of my patients at two of my clinics located in Kampung Baru (Kuala Lumpur) and Kajang (Selangor) that offer MRT.

“I believe the scenario was the same at other government or private clinics offering the same treatment to drug users,” he told Bernama.

MRT is among the Ministry of Health’s harm reduction programmes established for opioid abusers. Methadone is given in replacement of other opioids such as heroin and morphine in order to reduce the cravings and withdrawal symptoms experienced by patients.

Methadone is a synthetic drug that is taken orally and offers very similar effects as heroin or morphine but without the euphoric or “high” feeling.

Dr Mohd Khafidz said many patients who, before the MCO was enforced, were undergoing MRT and had a good record of staying away from opioids have now returned to using these prohibited substances.

In fact, they are also taking synthetic drugs such as syabu to fulfil their cravings, which is a worrying trend as it would complicate their rehabilitation process. This is because to date, no treatment has been discovered to help patients to overcome their cravings for synthetic drugs.

Dr Mohd Khafidz said those who stopped the MRT during the movement control periods would have trouble resuming their treatments and that it would take a doctor three to four months to coax them to return to the clinic.

He explained that a patient on MRT would have to take methadone every day according to the prescribed dosage (optimum dose), under the supervision of a doctor.

Methadone can keep away cravings for harmful drugs for 38 hours, thus enabling patients on MRT to get a job and lead a normal life.

“This is why there should be no interruptions to methadone therapy. Once it’s interrupted, the patient will become unstable and start looking for (harmful) drugs again. This is what upsets and frustrates me,” he said.

Reasons for stopping MRT during MCO

There were several reasons why drug users undergoing treatment stopped their MRT during the MCO, said Dr Mohd Khafidz, adding that one of the main factors was the presence of many police and army personnel at the numerous roadblocks. Drug users usually feel stressed when they see policemen as they are afraid of being apprehended.

“They are afraid their urine samples may be tested (for drugs) and the result will be positive. Also, these people usually don’t have a (vehicle or motorcycle) licence or their road tax has expired. To them, it’s better to take drugs than to be caught by the police,” he said.

He said methadone supplies are not allowed to be taken home by the patients unless they have reached a stable stage.

“This is why patients (who are still struggling with their addiction) must come to the clinic every day to get their methadone drug,” he added.

“Unfortunately, they were afraid to come to the clinic (during the MCO) and it was easy for them to procure drugs. In fact, the drugs were delivered to their homes.”

According to media reports, drug trafficking syndicates were found to have turned to courier and e-hailing services to deliver drugs to their customers during the movement control periods.

Dr Mohd Khafidz said some of his patients were not able to resume their treatments due to financial constraints as they had lost their jobs during the pandemic and were from the B40 group.

“They sincerely wanted to change their ways and lead a better life but the loss of their job, as well as the loss of their loved ones, such as mother, father or sibling due to Covid-19, left them feeling depressed, afraid and restless as they had lost their source of income and support system.

“Due to the stress they faced and inability to continue consulting a doctor or psychologist (which they were doing while undergoing MRT), they eventually returned to drugs,” he added.

Dr Mohd Khafidz said to overcome addiction to opioids, methadone has to be taken continuously for two to three years to stabilise the patient’s thinking, and after that, the dosage will be reduced gradually if he/she has attained a certain level of stability.

He said 30 percent of his patients have succeeded in stopping the methadone treatment after taking it for three to four years.

Stressing that the issue of MRT patients returning to drugs should not be viewed lightly, Dr Mohd Khafidz said many of them were in the productive workforce group aged between 22 and 55 and were at high risk of contracting HIV/AIDS and hepatitis B and C due to needle sharing.

Their risk of contracting HIV/AIDS and hepatitis C stood at 70 percent and 90 percent respectively, he added.