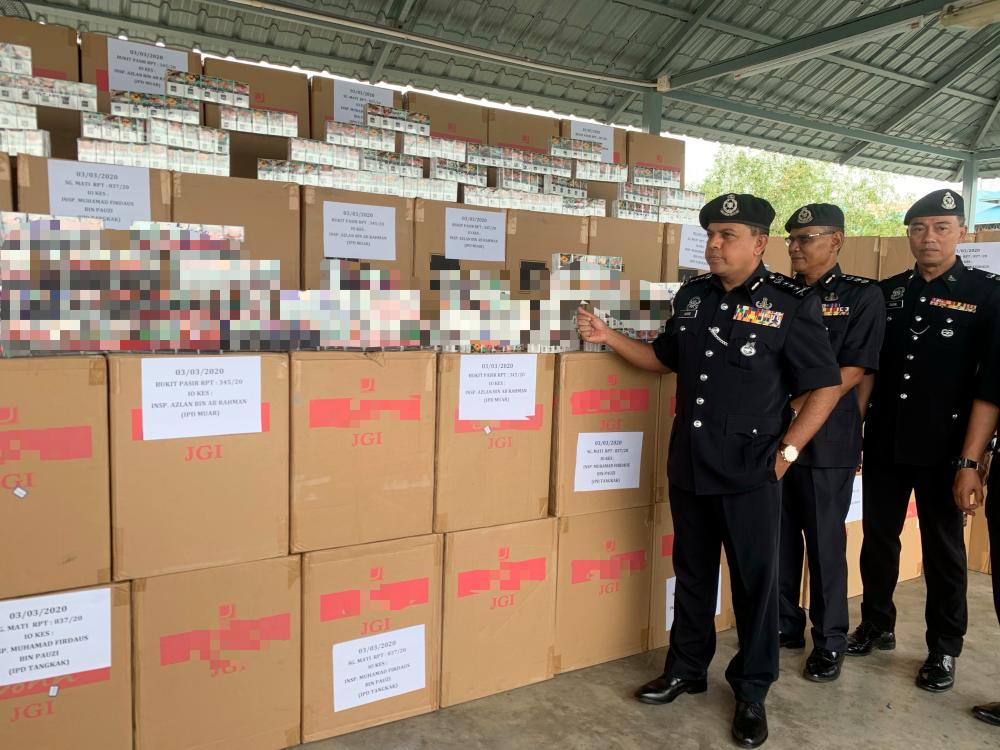 Johor police chief Datuk Ayob Khan Mydin Pitchay (3rd from R) displays some of the seized cigarettes worth a total of RM3.2 million, at a press conference at the Muar PPM base today. - Bernama

MUAR: In what is believed to be its biggest seizure, the Region Two Marine Police (PPM) have confiscated RM3.3 million-worth of cigarettes in two separate raids in Muar and Tangkak since Tuesday (March 3).

Johor police chief Datuk Ayob Khan Mydin Pitchay said the first raid, which was conducted by two PPM teams from Tampoi and Muar in Pekan Rawang, Tangkak, at about 2pm on Tuesday involved a lorry driven by a 31-year-old local man.

He said following a check of the vehicle, the department seized 212 boxes containing two million sticks of cigarettes worth RM3.1 million.

“At 3pm yesterday, police subsequently tracked down another suspect, a 28-year-old individual, at an oil palm plantation in Bukit Pasir here and confiscated contraband cigarettes worth about RM216,150 in a lorry.

“Besides the two lorries, the PPM also seized a van and a car believed to have been used in smuggling activities,” he told reporters at the Muar PPM Base, here today.

The first suspect has been remanded for 12 days and the second for three days.

As of yesterday, the Region Two PPM has recorded eight arrests connected to cigarette smuggling in the state, with an estimated three million cigarette sticks seized.

“These arrests involved two locals and six foreigners in the waters off Muar right up to the Johor Causeway.

“We believe the cigarettes were brought into the country through the north of the peninsula, and initial investigations found that they were bound for west Johor,” he said. - Bernama