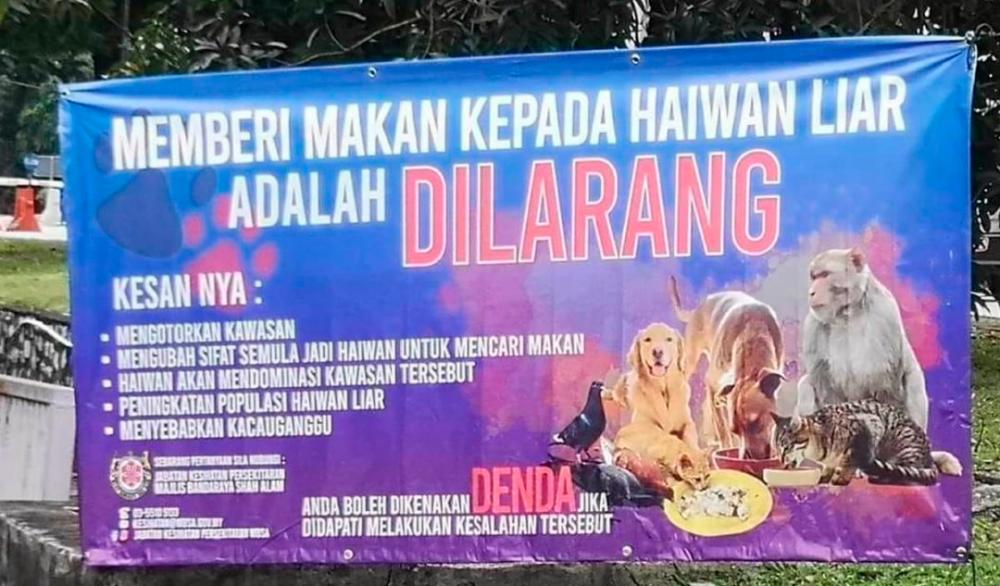 PETALING JAYA: While residents are up in arms over a Shah Alam City Council (MBSA) banner (pix) discouraging people from feeding wildlife and strays, environmental experts agree with the move.

Some residents called MBSA’s decision irrational. Soon after, the council released a statement on its official Facebook page stating that the banner was merely to educate the public to refrain from feeding strays as this had inadvertently increased the stray population in the area.

“MBSA has received a total of 1,840 complaints regarding stray dogs in 2020. These complaints were of strays causing disturbance to the public, and if this is not curbed, there will be a further increase in the number of stray dogs,” MBSA said.

EcoKnights vice-president Amlir Ayat said these measures by the council could be due to several reasons, including health concerns, safety and wildlife loss.

“Close contact with wild animals or strays multiplies the likelihood of human-wild animal disease transmissions, either through food or direct contact.

“Being ‘nice’ to animals in the wrong way could increase human-wildlife conflicts. Animals become less fearful of humans and thus more aggressive, leading to property damage, road and airport accidents, human injuries, and even fatalities,” he told theSun. EcoKnights is a non-governmental organisation that promotes sustainable living.

Amlir added the habit of feeding strays and wildlife could also lead to wildlife loss.

“Animals, even many domesticated ones, have specific diets which are different from humans.

“Food for humans can be detrimental or even fatal for them,” he said.

He noted that to a certain extent, this habit could also cause an imbalance in the ecosystem.

“When an animal dies unnecessarily, especially at a critical stage of its life, such as at its infancy or breeding stage, this loss will definitely disrupt not only the balance of local species population, but the entire ecosystem which also includes humans. A diseased wild animal could easily spread its sickness to others resulting in a disastrous ecological imbalance,” he said.

“Everyone has a different school of thought. However, whatever we do has to be done responsibly.

“It should be understood that when we feed these animals, we are creating a safe haven for them without understanding animal behaviour as a whole,” Shrilan said, adding that there is no right stand to the issue as the local council’s job is to look into the safety of the community too.

“All animals deserve the right to shelter, food, water and care. However, some of the concerns the council may have is the spread of diseases that these strays may carry, or unnecessary animal attacks where children are victims. We can’t call this move irrational as well since it is the local council which is dealing with the issue of overpopulation of strays to maintain the safety of the people”.

1.Inter fight back at Fiorentina to reclaim top spot

3.Review of MPTN Act 1996 expected to be completed this October - Noraini (Updated)