Mental abuse including cyberbullying a concern for Malaysian youths 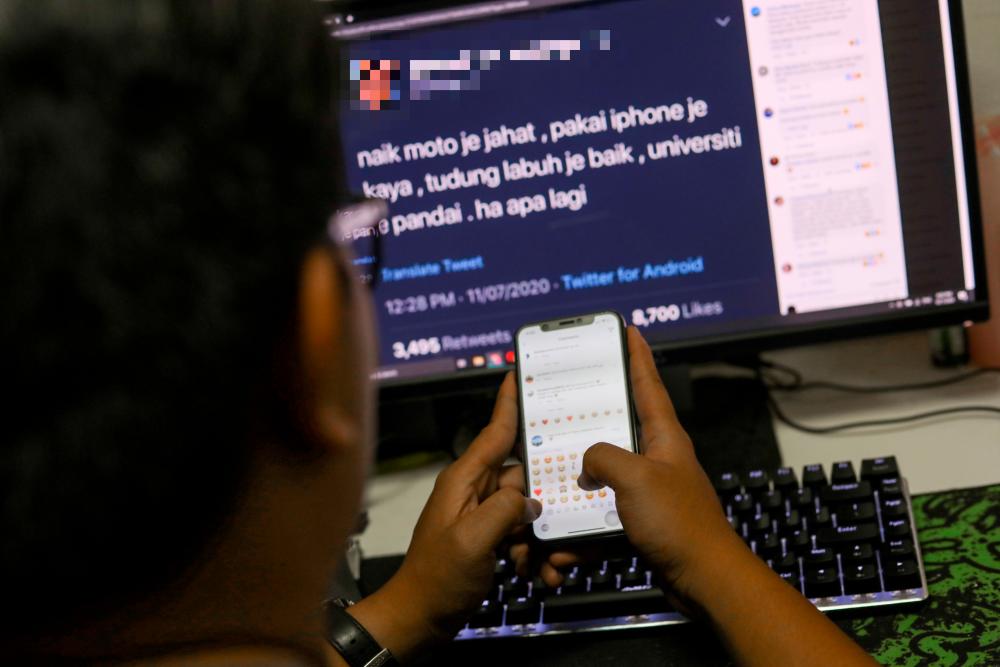 Pix for representational purposes only - THESUNpix

KUALA LUMPUR: Mental health issues, exacerbated by the Covid-19 pandemic is a cause of concern for the governments and communities across the globe.

However, for Malaysian youths from Gen Z like Vanishaa Rameas where the social media is part and parcel of their lifestyle, mental abuse on the cyber realm including cyberbullying is their foremost concern.

She says cyberbullying is actually rampant now as it can be carried out anonymously without the bullies having to face any real consequences.

“Kids and teenagers who are constantly tormented by their peers through WhatsApp groups, social media platforms or other apps may begin to feel hopeless and may end their lives to relieve the pain.

“Many young people and children use social media and they may be victims of cyberbullying. Hence, a strong advocacy is needed to fight for the empowerment of such victims,“ said Vanishaa to Bernama through WhatsApp.

Cyberbullying in the form of trolling, name calling, spreading false rumours, sending explicit images and harassing is becoming serious nowadays as it contributes to mental health issues and also increases the risk of suicide.

“I can personally relate to this matter, as I have been a victim of mental abuse in my former relationships, and I have witnessed my loved ones experiencing the same

“It took time for me to understand and learn that it is possible to psychologically abuse a person, and that there are ways we can fight it,” said Vanishaa a finalist competing for the Miss World Malaysia 2021.

She spoke on the subject because cyberbullying has become a cause for concern in Malaysia with many beauty queens, beauty pagent participants or social media influencers becoming the target of cyberbullies and trolls on social media of late.

Vanishaa aspires to educate the global community on how to avoid being mentally abused or being a victim of toxic relationship said, mental abuse through the act of cyberbullying is a social problem that continues to hound the global community with much being felt by the Malaysian teenagers, in recent times.

“My message to the young people, children and women, always surround yourself with people who encourage you, spread positivity instead of being around negativity.

“I want to educate them to focus on the good within them and educate them on self-love,” said the International Business Graduate who hails from Shah Alam, Selangor. - Bernama