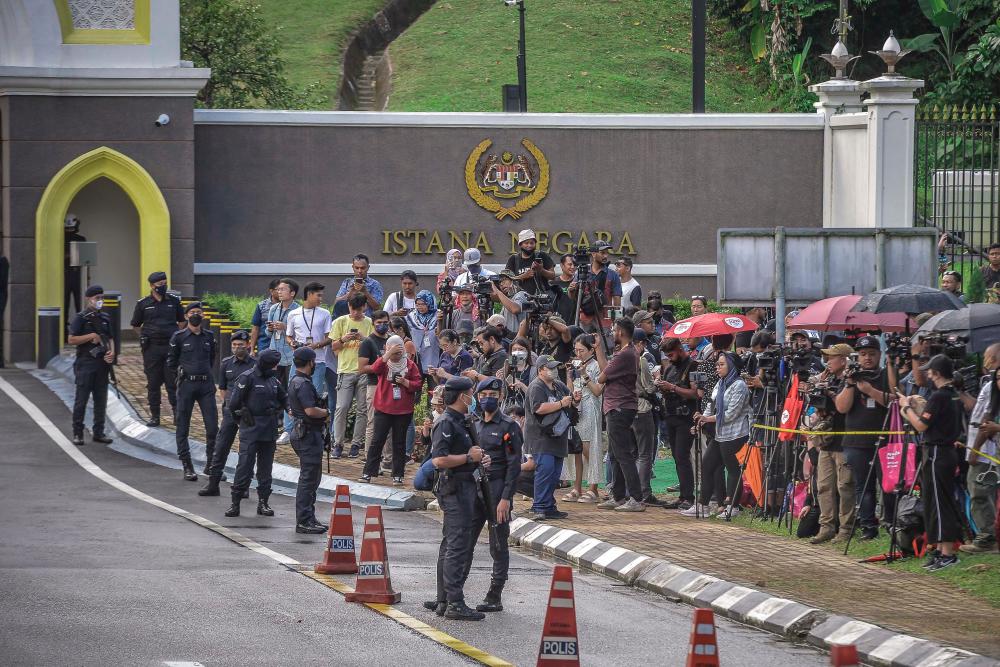 Media personnel have been staking out at Gate 2 of Istana Negara ever since the 15th general election resulted in a hung Parliament. – adib rawi yahya/theSun

PETALING JAYA: As the political impasse enters its fifth day with no new government in sight, will appointing a minority one serve the interests of Malaysians who wish to move past the 15th general election and have a functioning administration installed in Putrajaya?

Universiti Malaya Constitution Law expert Emeritus Prof Datuk Dr Shad Saleem Faruqi said yesterday a minority government should not be seen as an aberration but be welcomed as it can create a healthy check-and-balance of a country’s administration.

He added that it is common and many countries, such as New Zealand, Australia and Israel, have been successfully administered under minority governments.

Describing the situation in Malaysia as “teething problems”, Shad said the Federal Constitution may not recognise or outline how to deal with a hung parliament, but Malaysia could set a precedent by learning to manage the situation from the history of other nations.

He said democracy requires compromise and discussions before a decision is made, adding that this requires political parties to “abandon their rough edges” and embrace commonalities.

Shad also said with the current political stalemate, the mandate to form a government should, as soon as possible, be given to the person representing the party with the highest number of seats.

“The King makes a tentative judgement, which is then tested in Parliament, where the selected person will seek a vote of confidence. If he is voted out, then the person with the second-largest bloc should be picked. We have to adopt a holistic position as a civilised and developed democratic nation,” he said.

“A government with a razor-thin majority or without a majority is not a bad thing as it creates a greater check-and-balance mechanism. This is not the failure or defeat of democracy, and the current situation facing the country is also not as dire as it is believed to be.

“We have been complacent for over 60 years and become too used to an all-powerful political sovereign. Life is larger than the law. It has to be, as nobody can tell the future.”

He cited the case of caretaker Prime Minister Datuk Seri Ismail Sabri Yaakob, whose strength of support in Parliament was uncertain but had passed several laws and amendments in the House, such as the Anti-Hopping law, with the backing of opposition parliamentarians.

Shad said a coalition with a large majority is unhealthy as seen in the past when scandals went unchecked.

“Why did this happen? Because there was no strength in the Opposition for checks and balances,” he said, adding that a unity government is normally formed in situations such as war and emergencies.

“We do not have such a situation today, but there is nothing to prevent the experimentation of a unity government where the powers are shared between two or three major blocs.

“However, the prime minister must come from the largest faction, while his ministers can come from other blocs where every layer of society, such as the different races, differently abled and indigenous peoples are represented. That would be ideal but the question arises on why should an election be held in the first place if a unity government is to be formed?”

Shad said the current situation is a good sign that Malaysia is returning to a true democracy, now that the majority is no longer monopolised by a single coalition. 5.England show bite in battle of the lions