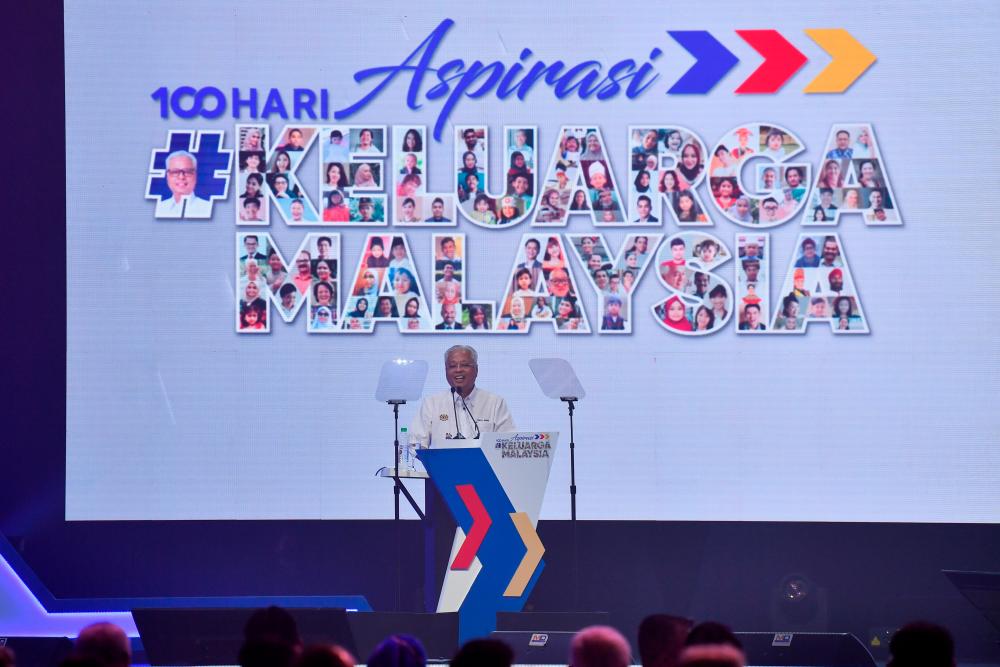 KUALA LUMPUR: The government through the Ministry of International Trade and Industry (MITI) has approved RM109.1 billion within the first 100 days of Keluarga Malaysia to increase foreign investment in the manufacturing sector, with the projected creation of 25,000 jobs.

Besides, said the Ministry of Plantation Industries and Commodities has increased exports in the agro-commodity sector with an export value of RM147.2 billion, raising the contribution to the income of the people and the country.

“Cognisant of the role of companies and entrepreneurs as the engine of economic recovery, the Ministry of Finance (MoF) has channelled RM3.3 billion through the Wage Subsidy payment initiative to assist the cash flow of small traders and enterprises, as well as small and medium enterprises (SMEs),“ he said when officiating the first 100 Days of Keluarga Malaysia Aspirations programme here today.

The Prime Minister said the initiative had benefited 189,000 employers and 1.9 million employees.

Ismail Sabri said the success of the National COVID-19 Immunisation Programme (PICK) through the cooperation of the Ministry of Health and the Ministry of Science, Technology and Innovation has enabled the full opening of the economic sector.

“This is a fundamental ingredient in the process of reviving the macro-economy and people’s resilience, thus sowing the seeds of strong recovery when the country enters the fourth quarter of 2021,“ he said.

Judging from Malaysia’s gross domestic product for the first nine months of 2021, he said a growth of 3.0 per cent was recorded compared to a contraction of 6.4 per cent in the same period last year.

“This latest figure is lower than the previous two months, indicating that the first 100 days have brought real results in terms of job opportunities,“ the Prime Minister said.

He said this favourable downward trend in the unemployment rate was also accompanied by a 24.7 per cent jump in exports and an 11.6 per cent increase in the sales value of the manufacturing sector in the same month.

Ismail Sabri said Malaysia recorded a positive growth of RM12.8 billion net foreign direct investment (FDI) in the third quarter of 2021 compared to RM8.2 billion in the second quarter, an increase of 56 per cent.

“This brings the total FDI for the first nine months of this year to more than RM30 billion, an increase of 300 per cent compared to the same period for 2020. This figure was achieved despite border closures due to the pandemic,“ he said.

Besides, he said various programmes were designed to ensure greater triumph in the survival of Keluarga Malaysia, and not only for the workers who were being championed but also entrepreneurs.

“The Ministry of Entrepreneur Development and Cooperatives has succeeded in producing 3,667 new entrepreneurs comprising youths, graduates and those who lost their jobs due to the pandemic,“ he said.

Meanwhile, he said the Ministry of Communications and Multimedia has channelled grants worth RM40.48 million to SMEs, digital creative industries, and digital industry companies.

“This is aimed at driving digital adoption, commercialisation of technology and intellectual property, thus strengthening competitiveness,“ he said.

In addition, Ismail Sabri said the Ministry of Agriculture and Food Industries (MAFI) in collaboration with Agro Bank has channelled financing worth more than RM80 million to 4,217 recipients, as well as targeting a total allocation of RM110 million until 2022. — Bernama