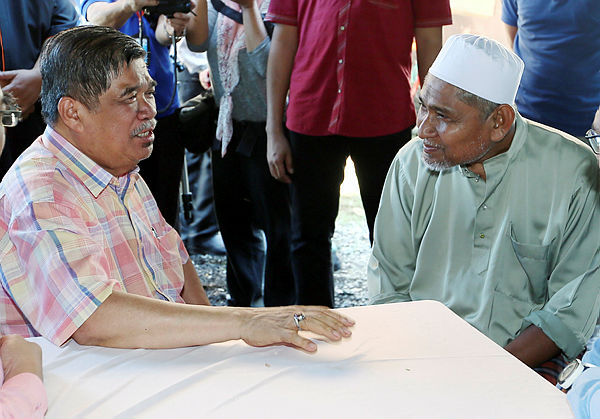 KUALA LUMPUR: Although his detractors might assume the arrest of his son on Saturday for suspected drug abuse would put a dent on his political career, Defence Minister Mohamad Sabu can stand tall for his openness and sincerity in facing up to the situation.

Known for his fiery yet humourous speeches during political talks, the minister is also a favourite among Malaysians for being humble and frank.

However, it was a gloomy Saturday for Mohamad Sabu and his family when he received a call from the police on the arrest of his 31-year-old son, Ahmad Saiful Islam Mohamad.

His son was in police custody with another man by Dang Wangi police after testing positive for ganja abuse during an anti-narcotics swoop at a nightspot on Jalan Ampang.

Later in the evening, Mohamad Sabu headed to the Dang Wangi district police headquarters where his son was being held and met with police.

Unlike many other politicians and top government servants of the past who evaded the media when faced with a similar situation, Mohamad Sabu, though emotionally beaten up, met waiting reporters. He was quoted as saying that he was hurt over the incident and hoped the public would not judge him and his wife on this case.

Mohamad Sabu also said his son, like the children of any other people, would be subject to the country’s laws and would have to face the music if he is found guilty.

Kuala Lumpur deputy police chief DCP Datuk Zainuddin Yaacob said at 6pm on Saturday, Ahmad Saiful and his 33-year-old friend were freed on police bail but investigations on the case were still ongoing.

Ahmad Saiful was born in 1987 when his father was serving detention at Kamunting while being held under the defunct Internal Security Act under the politically charged ‘Ops Lallang’.

On his official Facebook page, while some took a swipe at the Defence Minister, including one user who accused Mohamad Sabu of diverting the case by visiting the family of late fireman Mohamad Adib Mohd Kassim, urged him to stay strong and composed.

Facebook user Lee commented: “He admitted that it is his son and not twist and turn or denied ... it’s his son that has committed a mistake not him. We voted for him not his son. He has our respect”.

Others reminded the critics to be watchful of their words and that they too might “have children of their own and it was uncertain if the future would see them turn out to be proper or wayward”.

“A child grows up to be an adult and he is responsible for himself. If he or she makes the wrong choices and breaks the law, then he has to face the repercussions. It has nothing to do with the parents. It could be a minister, a sultan or anyone for that matter. I empathise with Mat Sabu and it is not his fault. As a parent, he has no control over his adult children,” he said.

In was yet another hurdle in his political career since assuming the post of Defence Minister in May of last year.

In August, Mohamad Sabu was put in a bad light when one of his aides came under the radar of the Malaysian Anti-Corruption Commission (MACC) for allegedly soliciting RM800,000 from several parties.

However, it was later revealed that the sum was a contribution from close friends of the aide to relieve a bankruptcy order the aide was placed under several years earlier.

RM45 fiscal injection must not be hijacked for political purposes: LGE

Flood: 680 healthcare personnel will be mobilised in Terengganu

Govt will intensify efforts to help MSMES under 12MP

1.RM45 fiscal injection must not be hijacked for political purposes: LGE