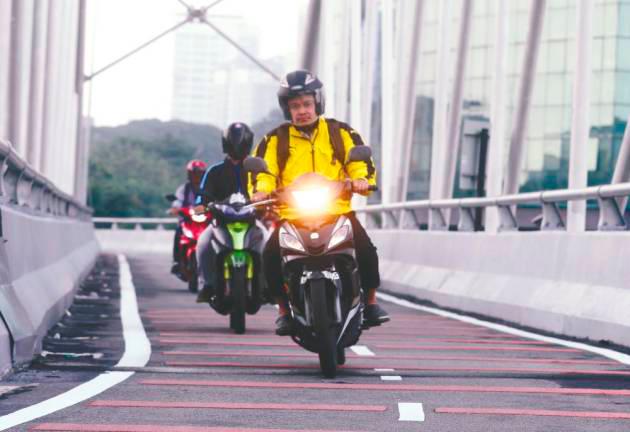 AS I sit on my hospital bed waiting for the results of my blood tests, I am reminded of the motorcycle rider who cut into my lane on the way there.

I hear two nurses joking with each other. “Do you know what they call victims of motorcycle accidents on their way to hospital?” asked one. “Spare parts”, said the other.

Anyone living in Kuala Lumpur knows about the huge number of motorcyclists on the road.

On my way to work in the mornings they buzz around me like mosquitoes.

Motorbike riders own the roads in Kuala Lumpur. They make the rules of the road.

Indicators are rarely used, traffic lights ignored and road signs are just suggestions to them.

Motorbike riders, especially the delivery riders, ride down the wrong side of the road, ride on pavements and in bicycle lanes.

I have had more than my fair share of run-ins with motorcycle delivery riders.

I say this as a long-term motorcycle rider myself. I have driven motorbikes for most of my adult life, in many countries, across deserts, through jungles and even on some of the so-called “dangerous highways” of Russia, Turkey and Morocco. I love my motorbikes.

I have probably had over 10 different models in my lifetime, from little 125cc’s up to big 1200cc’s. Road bikes, trail bikes and racers. I have loved them all.

I am a good and experienced motorcycle rider. I adhere to the rules of the road, wear my safety gear and mostly keep to the speed limit.

My run-ins with motorcycle delivery riders in Malaysia have been while driving my car.

As a motorcycle rider myself, I am always aware and on the lookout for motorbikes.

I like to give them space and usually, when safe to do so, give them priority on the road. By run-ins I’m talking about arguments, road rage and even violence.

Each time I have avoided crashing into a motorcycle delivery rider (five times in the last 18 months), as they have cut into my lane by swerving in front of me, or jump a traffic light, I would respond by honking at them.

Without exception, they have become upset by this and have even chased me down the road kicking my car, swearing, threatening me and my kids in the car.

Their thought has not been, “thank you, you just saved my life”, but that I was wrong to let them know about it by sounding my horn.

In the UK, I was taught that using the horn was a way to let someone know you were there, a kind of helpful warning to potential danger.

I should probably draw your attention to the following facts: Research shows that Malaysia has the highest road fatality accidents among Asean countries and over half of these accident fatalities involve motorcyclists.

Malaysia also has the highest rate of motorcycle accident fatalities, as a percentage of the population, than any other country in the world.

In 2019, 64% of road deaths in Malaysia involved motorcyclists. That is mind-blowing but not surprising. The rates have been rising year on year.

Although the ignoring of traffic lights and the lack of indicator use is very dangerous, what upsets me the most is seeing parents take their little children on motorbikes, especially along dangerous and packed highways.

It scares the hell out of me. It sends shivers through my bones. Little kids, babies even, perched in front of the rider or held in mother’s arms.

This, to me, is bad enough. What makes it even worse is that 99% of the time, the rider (dad?) will be wearing a crash helmet and the child will not.

Over 60% of the motorcycle accident fatalities in Malaysia involve a head injury.

In fact, I have seen “no” protective gear on any child on any motorbike in Malaysia ever. What are these parents thinking?

I could not even dream of putting my children in that kind of danger.

This does not just happen in Malaysia, I see it all over Southeast Asia, China and India.

In Malaysia, children riding pillion, involved in motorcycle accidents, are among the highest traffic-related deaths.

Communicating these thoughts, ideas and dangers to people are really difficult.

For many people in Malaysia, the motorbike is the only affordable form of transport available.

Families, particularly in rural communities, where there is no public transport or school buses, often have no other means other than their motorbike to get their children to school.

These problems, these dangers are certainly worth a discussion, a dialogue.

For me, three things are key. Firstly, their needs to be a development of “road courtesy” among all drivers in Malaysia; finding ways to communicate a “thank-you”, letting people filter into “your” lane without road rage, less angry flashing of people you want to overtake at speed and the stopping of traffic light jumping.

Secondly, parents need to provide protective gear such as helmets for their children who ride on the motorcycles with them.

Thirdly, I believe there needs to be an awareness campaign, such as one we had in the UK called “Think Bike”.

This last point is really important for car drivers who repeatedly switch lanes to avoid traffic without indicating and without looking or checking for bikes.

Communication is the key to success. If this article saves just one life, I will be happy.

Dr Andy Hickson is an English professor and dean of the Faculty of Arts and Communication at HELP University in Kuala Lumpur, Malaysia. Comments: letters@thesundaily.com