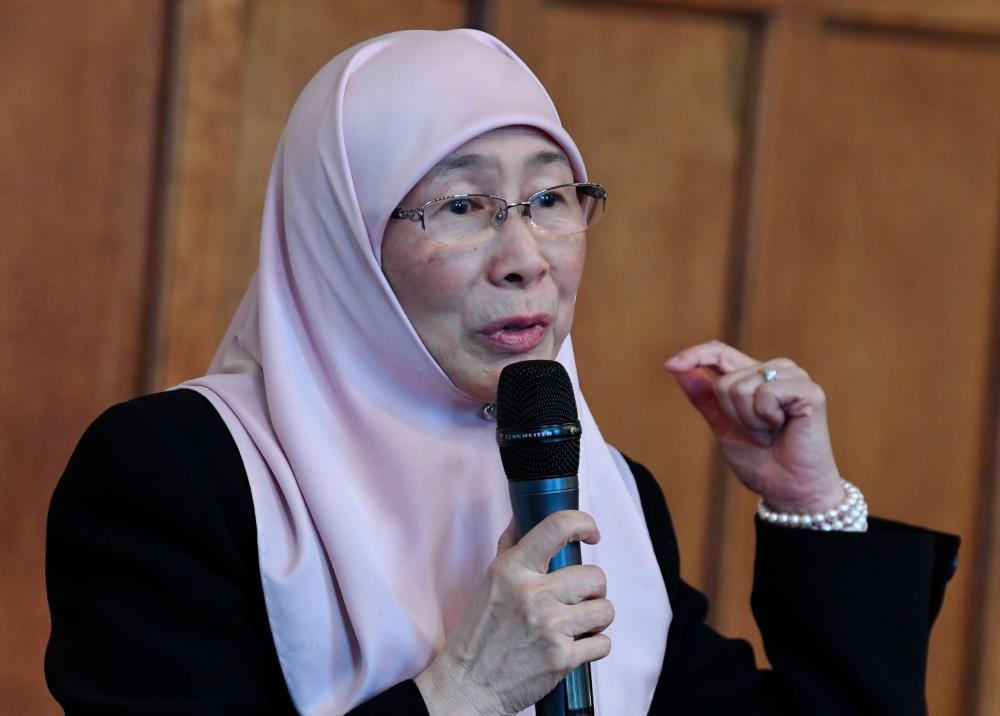 LONDON: Muslim women must come forward, develop their skills and potential, utilise their talents and entrepreneurial abilities in order to see a genuine long term improvement in the Muslim societies.

She said Muslim men need to dismantle the chauvinistic mentality that is inherent in some of the local cultures.

“We can never attain social justice on the basis of skewed and unjust interpretations. Human dignity, wellbeing and upliftment of our people irrespective of gender, race, class or ethnicity in peaceful, tolerant and inclusive societies are of utmost importance.

“But all of these must include the men,“ she said in her keynote address at the World Muslim Leadership Forum (WMLF), held at Lambeth Palace in south London, Thursday morning.

Wan Azizah, who arrived here yesterday for a three-day official visit to the United Kingdom, joined other Muslim leaders from different corners of the globe to explore key issues, address challenges and provide innovative solutions to delinking associations made between terrorism and Islam.

In her keynote address entitled “The Role of Women and Girls in Achieving Sustainable Development Goals (SDGs) by 2030”, the deputy prime minister emphasised that it was crucial to have a systematic mainstreaming of gender perspective in the implementation and monitoring of the SDGs.

She said the SDGs adopted by all world leaders in 2015 embodies a roadmap for progress that is sustainable and promises to leave no one behind.

“Currently, across countries, women and girls are still experiencing multiple and intersecting forms of discrimination,“ she told about 200 delegates of the two-day WMLF.

However, she argued that the SDGs were inadequate as they focused mainly on the social, economic and physical aspects of development only.

She said governments could create policies and programmes to support SDGs but it was the personal change at the individual leaders level that would determine the attainment of the SDGs.

“Pursuing the SDGs has to begin with having the right leader driven by a sense of personal responsibility to that purpose. This purpose is about delivering ‘rahmah’ and consequently addresses all the seventeen items of the SDG.

“The highest level of personal development is attaining ehsan,“ said Wan Azizah, who is also Minister of Women, Family and Community Development.

However, she said the Muslim societies are still being hindered by many constraints as the practice of Islam among many Muslims continues to be shaped by local traditions and customs.

“Intolerance and narrow mindedness still hamper our intellectual growth,“ said the first woman deputy prime minister of Malaysia, who was appointed to the Cabinet in May.

She also shared some lights of Malaysia’s new administrative experiences in empowering women and girls in achieving the SDGs target.

She mentioned among others the i-SURI initiative to strengthen social security for housewives, the MySMELady that crafted specially for women entrepreneurs, and the creation of Child Friendly Cities.

The two-day forum which carries the theme “The Role of Muslim Leadership in Rebuilding Islam’s Global Image”, aimed at addressing problems engulfing the Muslim world such as civil wars that are causing mass migrations, genocide being perpetrated, acts of terrorism and extremism, and the emergence of Islamophobia.

It focuses on four critical aspects, namely creating a new narrative about Islam; strengthening Muslim leadership at all levels of socio-economic and political landscapes; women empowerment and the role of women in re-shaping the new Islamic narrative; and creating platforms for Muslim leaders to offer solutions to current problems such as youth education, entrepreneurship and advocacy for sustainable development. — Bernama