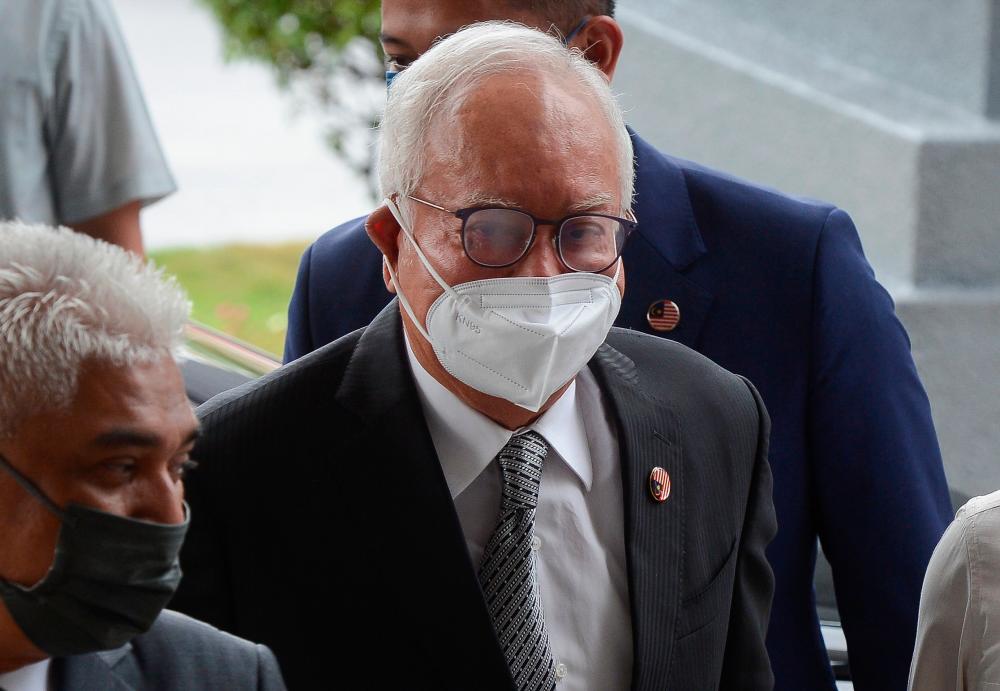 KUALA LUMPUR: Datuk Seri Najib Abdul Razak(pix) has applied to the Court of Appeal to allow new evidence to be adduced in his appeal over his 12 years’ jail sentence and a fine of RM210 million for misappropriating RM42 million SRC International Sdn Bhd funds.

The former prime minister filed the application yesterday through his solicitor Messrs Shafee & Co, just a week before the Appeals Court was scheduled to deliver its verdict on Dec 8.

Through a notice of motion that made available to the media, Najib is applying for the Appeals Court to allow and to direct for viva voce evidence to be taken from Malaysian Anti-Corruption Commission (MACC) chief commissioner Datuk Seri Azam Baki, MACC investigating officer Rosli Hussein, who was the 57th prosecution witness in the SRC case, as well as evidence of any other witness in relation to the case.

In an affidavit filed in support of his application, Najib said, the application has been made by him without delay as soon as he was made aware of and was able to accumulate all the necessary information and documents.

Najib, 68, claimed that such information was not available or could not be obtained during his SRC trial at the High Court and when the Court of Appeal previously heard the appeal.

Najib stated that he made the application following the MACC's press release dated Nov 19 this year, on the recovery of fund assets of 1Malaysia Development Berhad (1MDB) inter alia from Singapore.

“It was stated that, the Government of Singapore had repatriated a sum of US$15.4 million to Malaysia relating to an account of Cutting-Edge Industries Ltd (CEIL) owned by Datuk Dr Tawfiq Ayman, the husband of former Bank Negara Malaysia (BNM) governor Tan Sri Dr Zeti Akhtar Aziz.

“In October and December 2020, articles were published by an online news portal which reported that Zeti and her family had received millions of dollars from fugitive businessman Low Taek Jho or Jho Low including funds linked to 1MDB,” he said.

Najib claimed that Tawfiq and his two sons namely, Alif Ayman Aziz and Abdul Aziz have signed a statutory declaration to state that they were the beneficial owners of CEIL's account where the US$15.4 million was repatriated and consented to the Singapore Commercial Affairs Department (CAD) making an application for it to be transferred to 1MDB account.

The funds were said to be from Iron Rhapsody Ltd, a company based in the British Virgin Islands that was operated by Tawfiq and one of his sons.

Najib's affidavit stated that between 2008 and 2009, Iron Rhapsody received US$16.219 million from companies owned by Jho Low as a result of 1MDB's Islamic Medium Term Notes of RM5 billion that were flipped in 2009.

Najib claimed that, on Jan 20 2021, his solicitors had written to the Monetary Authority Singapore and the CAD to obtain verification and documentation relating to the accounts of CEIL, Iron Rhapsdoy Ltd, Jho Low as well Nik Faisal Ariff Kamil (former chief executive officer of SRC) and the legal proceedings taken towards seizure of properties belonging to them.

“Several follow-up emails were also exchanged. Ultimately, on March 24 this year, my solicitors received an email from an officer of the Commercial Affairs Department declining my solicitor’s requests. Despite the above efforts, I was unable to obtain the evidence which has now been credibly verified via the MACC’s press statement dated Nov 19 this year.

“I verily believe that the evidence that has been credibly discovered and verified reveals the complicity of Zeti of Jho Low’s schemes. I believe that Zeti’s role in facilitating Jho Low resulted in no red flags or irregularities being raised on matters regarding the transactions in my accounts between 2011 and 2015 and further provided the means for Jho Low to carry out his manipulations,“ Najib said.

Hence, he is seeking the Court of Appeal to decide on this application before delivering its decision.

On Nov 23, the Appeals Court had fixed Dec 8 for decision and on the same day, Najib had applied to the court to vacate the decision date, due to the fact that he would be in Singapore until Dec 5.

However, on the next day, the Appeals Court rejected Najib’s application.-Bernama