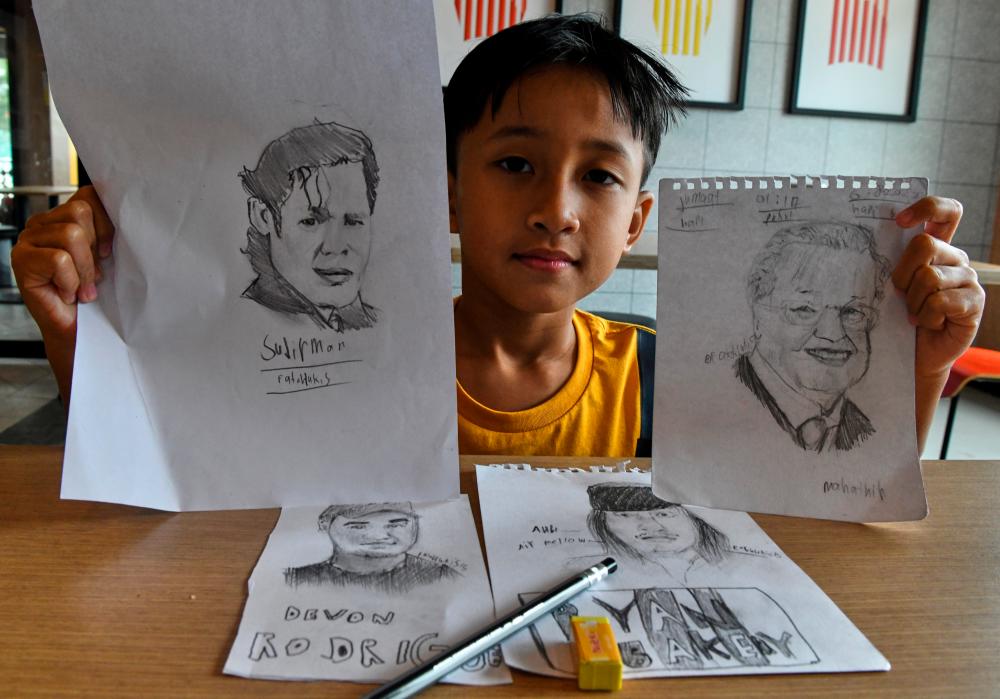 BUKIT MERTAJAM: An eight-year-old boy has won the hearts of netizens after his mother shared his portrait sketches and animated drawings and videos on Tik Tok.

“Fateh’s interest in drawing began at age three and he used to draw cartoons, especially Ultraman characters, on the walls of our house.

“As parents, we never stopped him as we want to encourage him to express his creativity,” said his mother Khairunisa Mamat.

She said when her Year Two son was between three and seven years old, he used to sketch cartoon characters such as Boboiboy, Ejen Ali, Naruto, Ultraman and animated characters, but since last March he has turned to portraits.

“He would secretly draw portraits of people, especially those he came across while we were out dining or shopping at the mall,” she told Bernama when met recently.

Elaborating, Khairunisa, 34, said Fateh the fourth of five siblings, learned to draw through tutorials by Amamijan, Ali Haider and Devon Rondriguez on YouTube and would take 15 to 20 minutes to complete a portrait.

Meanwhile, his father, Mohd Faridil Amir Shobri, 38, said the reason they shared Fateh’s work of art was to document their son’s life journey and to teach him to accept constructive criticism.

“Fateh reads the comment section and takes note of them to improve his drawings, “ he said adding that some hailed his commendable effort which inspired and motivated him further.

Meanwhile, Fateh said that he aspired to become a professional artist because of his deep interest in the field and hoped to attend a portrait painting course.

“I draw portraits because I want to make people happy and every time I see them smile when I hand over my drawing, it makes me feel good.

“Some wanted to pay me after I have drawn their portrait but I refuse to accept any as I am doing this for free because drawing is my passion,“ he said.-Bernama