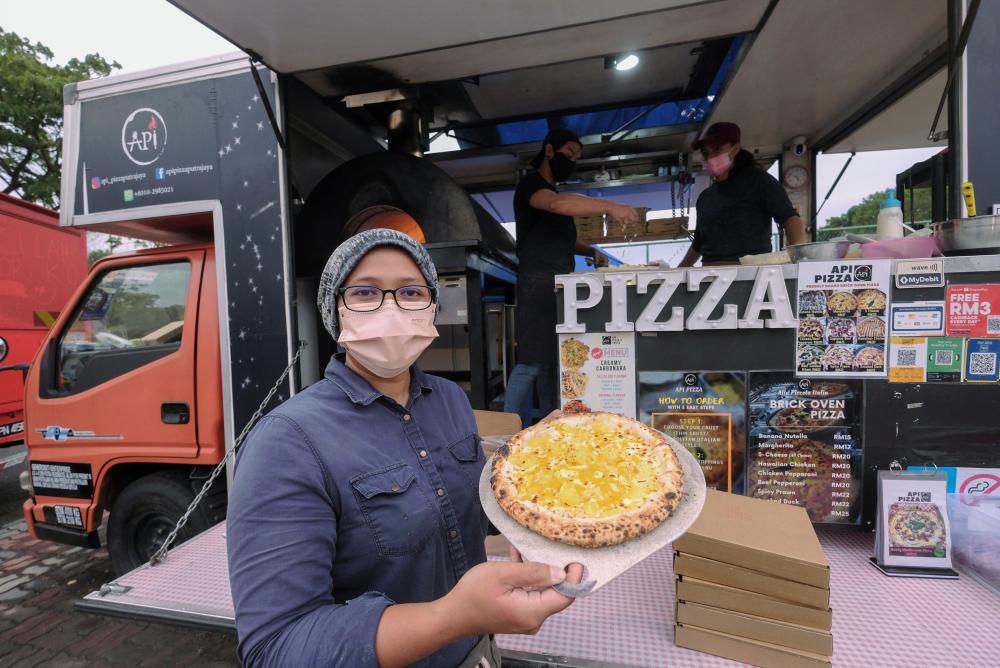 PUTRAJAYA: While many entrepreneurs have caved in to the challenges posed by the Covid-19 pandemic, a group of petty traders here have managed to keep going after tweaking their business strategies.

One of them Siti Rafitah Rakhimi, 37, who operates a food truck in Precinct 14 here, realised she could not depend on her traditional mode of business after the Movement Control Order (MCO 1.0)) was first imposed in March last year.

Like thousands of other entrepreneurs, Siti Rafitah – whose specialty is a range of pizza that she herself developed and marketed under the brand name Alla Piccola Italia (API) – decided to take her business online, thus enabling her to extend her market to all over Putrajaya and Cyberjaya.

“Before the pandemic struck, I felt that operating from one site would be good enough as I could get a lot of customers. But that view changed after the MCO was imposed and all places were affected,” she said.

She told Bernama she started selling her pizza online as soon as MCO 1.0 was enforced and promoted her venture via her Facebook and Instagram accounts, as well as leaflets that were distributed door-to-door.

“I just couldn’t let my business die... I am now targeting regular customers who enjoy eating the pizza I make,” said Kedah-born Siti Rafitah who started her food truck business in 2019 and has a degree in human resources from Universiti Putra Malaysia.

According to Siti Rafitah, out of the 14 food truck operators who used to do business at Precinct 14 here, only four, including her, are still operating there.

“Some of my fellow traders have been forced to take up other jobs, including driving for e-hailing companies. Currently, our priority is not to make a profit but to keep our businesses alive,” she said, adding that she almost felt like throwing in the towel after MCO1.0 was imposed.

“Just imagine, at that time my business was barely a year old and I was still trying to establish my pizza brand... then, suddenly came Covid-19.”

Siti Rafitah, who received a business loan of RM150,000 from Majlis Amanah Rakyat (MARA) to start her food truck venture, said she decided to persevere when she thought about the fate of her two workers who had been working for her since she embarked on her business.

Before the MCO, she could rake in weekly sales of about RM4,000 to RM5,000 a week. Following the movement restrictions, her weekly sales dipped to between RM1,000 and RM2,000. Business, however, is getting better now as orders for her pizza are increasing daily.

Rafitah, who learned to make pizza from scratch via YouTube videos, offers 14 types of pizza featuring various toppings, each priced at between RM15 and RM30 depending on its size and type.

She has also hired two riders to deliver her orders, which usually peak between 5 pm and 8 pm.

“The pandemic has taught me to adapt to uncertainties. We must always be prepared to face any situation although our product had been well-received previously,” she said, adding that she is also grateful for the RM3,000 grant disbursed by the government to small and medium enterprises (SMEs) under its Prihatin Special Grant initiative.

Meanwhile, Muhammad Hadi Abdul Rahim, 40, operator of Sarah Satay Ampang, said he had to close seven of his 10 branches in the Klang Valley following the implementation of MCO 1.0.

Muhammad Hadi, who is still working hard to sustain the business that has been in operation since 1981, said before the pandemic, each of his branches could sell 3,000 sticks of satay a day.

“Our sales have plunged by 50 percent since the MCO was enforced in March last year,” he lamented.

Muhammad Hadi, who is based at Precinct 15 here, said although the government has been extending aid to SMEs, petty traders are still facing financial constraints as they have to continue paying the rental for their premises and their workers’ salaries.

Pointing out that their cash holdings have almost dried up, he said the rising prices of raw materials have worsened the situation.

“Fortunately, we are allowed to remain open until 10 pm, compared to the MCO last year when we couldn’t operate at all,” he added. -Bernama

4.Socso paid RM11.9 mln in compensation to employees infected with Covid-19 at workplaces