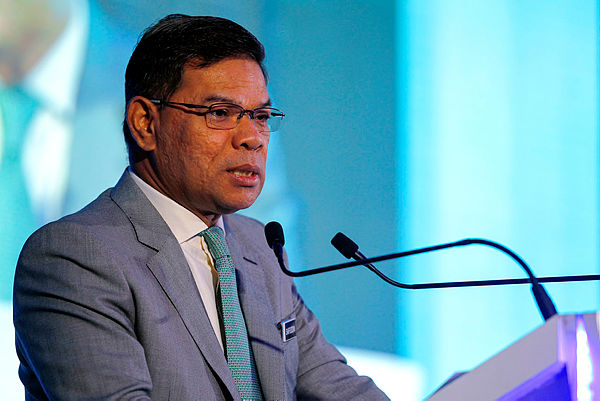 KUALA LUMPUR: An article penned by Domestic Trade and Consumer Affairs Minister Datuk Seri Saifuddin Nasution Ismail (pix), which appeared in a Malay daily on Oct 6, explains why the across-the-board fuel subsidy is being replaced by the Targeted Fuel Subsidy Programme.

Making a comparison between a car with a fuel tank capacity of 30 litres and a vehicle equipped with a 70-litre capacity tank, Saifuddin Nasution said in accordance with the prevailing RON95 petrol prices at the time he wrote his article, it would have cost the owner of the first car about RM62 each time he or she filled up the tank, with his or her monthly petrol expenses coming to about RM249.60.

In the second scenario, it would have cost the owner about RM145.60 to fill up the tank and the monthly petrol bill may amount to about RM582.40.

The prevailing RON95 price then was about RM2.08 a litre, minus the 30 sen subsidy given by the government.

Based on the 30 sen per litre subsidy, wrote the minister, the government would have paid RM36 a month for the first owner, who is presumedly from the B40 group.

“Just imagine the second scenario where the owner is probably rich as he owns a car with a 70-litre tank. Every month, the government is subsiding the cost of his RON95 petrol by RM84,“ he said.

It is indeed ironical that the monthly fuel subsidy enjoyed by the wealthy car owner is more than twice that of the B40 car owner.

To be implemented in Peninsular Malaysia on Jan 1, the Targeted Fuel Subsidy Programme (Program Subsidi Petrol or PSP) will involve an estimated 2.9 million recipients from low-income or B40 households who will receive a cash aid of RM30 for cars and RM12 for motorcycles.

The payment will be credited into their bank accounts once every four months. The first payment for the January-April period will be made in April 2020.

The Domestic Trade and Consumer Affairs Ministry is currently collecting data on the middle-income or M40 group and once it is finalised, another five million people from this group will also be eligible for PSP.

Under PSP, only the targeted groups will get to enjoy the fuel subsidy. This scheme, in fact, was among the pledges made by Pakatan Harapan in its 14th General Election manifesto.

Following the implementation of PSP on Jan 1, the retail price of RON95 will be floated gradually so that it will not have a material impact on the prices of essential goods.

Hotel housekeeper Johari Salleh, 41, said it puzzled him that people from the high-income group who owned big cars also used RON95 when the subsidised petrol was meant for those in the lower-income bracket.

Johari, who resides at a low-cost housing scheme here and owns a Proton Saga Aeroback car, welcomed the implementation of PSP as the subsidy payment is specifically aimed at targeted groups.

PSP is applicable to eligible Malaysians in Peninsular Malaysia who must own the vehicle in his or her name and have a valid road tax. The car must have an engine capacity of 1600 cc and below; vehicles above 1600 cc that are more than 10 years old are also eligible for PSP.

In the case of motorcycles, they must have an engine capacity of 150 cc and below, while those above 150 cc must be more than seven years old.

Malaysians in Sabah, Sarawak and Labuan will continue to receive the across the board subsidy with the retail price of RON95 capped at RM2.08 a litre.

Lecturer and geostrategist Azmi Hassan, meanwhile, described PSP as an appropriate measure that should have been implemented a long time ago.

“The across the board fuel subsidy is ineffective as it leads to leakages and results in ineligible people enjoying the subsidy.

“Not only the rich but visitors who stay in this country also get to enjoy the subsidised fuel,“ he said.

According to data compiled by Iskandar Regional Development Authority — the agency in charge of Iskandar Malaysia, the southern development corridor in Johor — about 400,000 vehicles enter and exit Johor each month, many of them owned by Singaporeans who also get to enjoy the subsidised RON95 petrol.

Then, there are the syndicates that buy the RON95 fuel and diesel at subsidised prices and either smuggle it across the border to neighbouring countries or sell it to local manufacturing firms that use the subsidised fuel for their factory operations.

Azmi said these firms should by right buy fuel at the market price as the subsidy was not applicable to them.

Leakages and abuse of the fuel subsidy have cost the government millions of ringgit in losses. According to media reports, 14.4 billion litres of RON95 petrol are consumed in Malaysia every year. For this, the government has to bear yearly subsidies amounting to a whopping RM4.32 billion.

“This is why it is not fair to give across the board fuel subsidies. It is not easy for the government to impose regulations to prevent foreigners from buying subsidised fuel. Fortunately, with the implementation of PSP, the subsidy will not be abused. The targeted subsidy scheme will certainly achieve its goals,“ added Azmi.

The PSP was initially only meant for those from the B40 group who also receive the Cost of Living Allowance (Bantuan Sara Hidup). However, in Budget 2020 the government announced that PSP will be extended to eligible people from the M40 group.

The M40 recipients may get their subsidy in the form of a card called Kad95, which will entitle them to a 30 sen per litre subsidy for RON95, limited to 100 litres a month for cars or 40 litres for motorcycles.

Kad95 will be introduced in stages in the first quarter of 2020.

On complaints that the PSP subsidy payment is too low, Azmi said it is time society understood the real meaning of the term subsidy.

“The government gives subsidies to help relieve the (financial) burden of the people. The amount given may be small but it is still a subsidy that is given to ensure the well-being of the people,“ he added.

“The PSP is a sincere move on the part of the government and I’m sure they will increase the subsidy in future if the need arises,“ he said.

He said the implementation of PSP may encourage the recipients to learn to use petrol more efficiently and even look for cheaper alternative transport.

“If they have access to cheap, efficient and comfortable public transport services from their home to their workplace, I’m sure they will switch their mode of transportation from car to public transport to keep their commuting costs low,“ he added. — Bernama

2.Sparse attendance at rally in support of US Capitol rioters

5.US to step up deportation flights for migrants stranded at Texas bridge