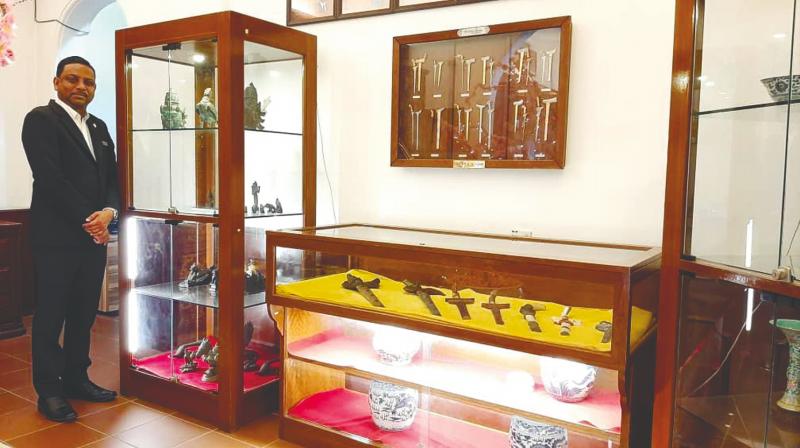 Samford poses with some of the artefacts.

MALACCA: A treasure trove of artefacts, left to rot in a storeroom, have now become a major attraction at the Shah Beach Resort in Tanjung Kling here.

Resort manager Dennis Samford said he was looking through the storeroom after joining the resort in 2017 when he chanced upon a collection of items that was gathering dust.

These items, which included keris, figurines of Hindu deities and ancient Chinese ceramics, were just left in a corner of the room.

Also in the collection were items dating back to the Majapahit civilisation, figurines of Lord Vishnu and Trimurti and even a Peranakan bridal bed.

“When we found the items, one of the housekeeping staff suggested that we sell the figurines to antique collectors but (resort chief executive officer) Shahrum Shah objected,” Samford said.

Shahrum told Samford the collection had been kept in the storeroom since the 1970s.

He then had all the items taken out of the storeroom to be cleaned and displayed in a room in the resort for guests to view.

Given that Malacca has been declared a Unesco World Heritage site, Samford thought it would be appropriate to display the items to highlight their historical significance.

“But I only had a few items such as the keris displayed at the reception.

“The rest of the collection was showcased in an empty room.”

Last year, a European guest who saw the items pointed out to him that the artefacts have historical significance and should therefore be given greater prominence.

“He also believes the findings should be made public so people could appreciate its legacy, including the need to provide a historical perspective,” Samford said.

He took the guest’s advice and had the items moved to the reception area.

The resort also engaged historians and museum authorities to evaluate the items to get a sense of their value and for future references.

He served as managing director of the now-defunct Utusan Malaysia newspaper.

Apart from that, Habib was involved in real estate development in Selangor.

He built the Shah Village Motel in Petaling Jaya in 1967, and was owner of a drive-in cinema.

US will accept mixed doses of vaccines from international travelers

3.$590 million in ransomware payments reported to US in 2021 as attacks surge