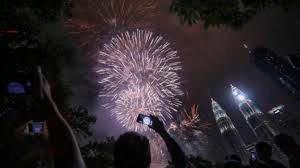 KUALA LUMPUR: Among the most awaited moments by Malaysians with only one more day to go before the new year 2021, especially city dwellers, are the massive celebrations and fireworks displays in public areas such as Dataran Merdeka, KLCC compound and Dataran Putrajaya.

But this year, the still rampant Covid-19 pandemic had stunted plans to hold large-scale New Year’s Eve celebrations, let alone such large-scale assembly activities are not allowed by the government.

Senior Minister (Security Cluster) Datuk Seri Ismail Sabri Yaakob on Monday stressed that events or activities via gatherings are still prohibited as stipulated due to difficulty in controlling physical distancing.

Meanwhile, a spokesperson for Prasarana Malaysia Berhad told Bernama that the bus and rail transit network service hours would not be extended until early in the morning as usual on Jan 1.

Therefore, in order not to disappoint the public celebrating the year 2021, the Kuala Lumpur City Hall (DBKL) came up with a difference this year by holding the 2021 New Threshold Virtual Concert.

DBKL, through its official website, said the Covid-19 pandemic attack forced it to switch to new methods in the implementation of various aspects of work.

“Not an exception is the DBKL’s Kuala Lumpur Orchestra (OKL), which all the while has been proudly providing live entertainment on stage as well as being the musical backbone for hundreds of celebrities performing since 1988.

“Now OKL will continue to play for city residents but virtually through online broadcasts in conjunction with the 2021 New Threshold Virtual Concert,“ it said.

The virtual concert would be posted on DBKL’s official Facebook and Bapakku.FM Facebook on Dec 31, 10 pm with the theme ‘City Folks Continue to Persevere’ as an analogy to the Covid-19 situation that befell the country and the world.

Meanwhile, it is understood that only Sarawak will be organising a new year celebration event at the Kuching Indoor Stadium by following the Standard Operating Procedures (SOP) set and only one thousand invited guests would be allowed to attend.

Sarawak Tourism, Arts and Culture Minister Datuk Abdul Karim Rahman Hamzah was reported to have said that the organisation of the event had been approved by the Sarawak State Disaster Management Committee (JPBN), but the committee would always be vigilant taking into account every SOP outlined.

However, there would be many Malaysians who would prefer to spend time at home or take their families on outings while complying with the SOP which would simultaneously be seen as complying with government directives that prohibited New Year celebrations in large gatherings.

Najihah Akhmal Madiki, 24, who lived in Shah Alam, planned to go on holiday to Pangkor Island with her family compared to last year’s celebration which was held en masse at Dataran Putrajaya.

“For the new year celebration this time, my family and I plan to stay at a hotel and bring our own food while picnicking on the beach to avoid congestion at restaurants there,“ she said when contacted today.

A food entrepreneur in Perak, Mohammad Nasharuddin Md Noor, 24, said he and his family would only fete the new year by having meal events at home, just like last year’s celebration. -Bernama

Kelantan civil servants to get aid of RM1,000: MB