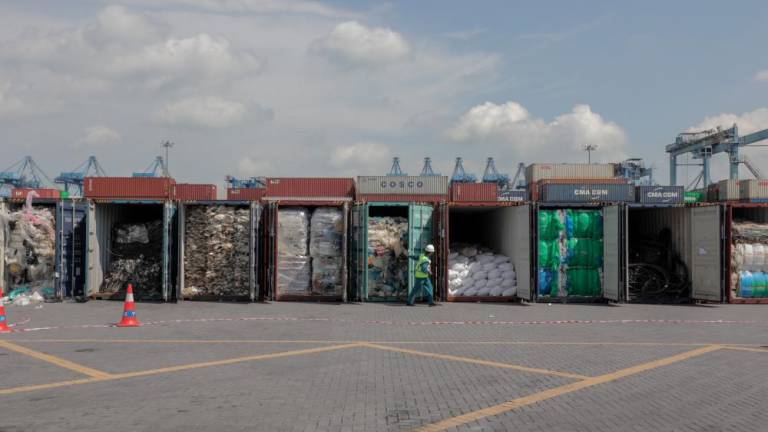 KUALA LUMPUR: The decision by the Environment Ministry under the leadership of minister Datuk Tuan Ibrahim Tuan Man to continue the initiatives implemented by the previous government is welcomed by non-governmental organisations.

Director of non-governmental organisation Treat Every Environment Special (TrEES), Leela Panikkar, said existing policies, especially the repatriation of all illegal plastic waste to their home country, should be pursued further.

“Plastic waste must be sent back to the country of origin, to shame them and to make sure it is not repeated. This will also demonstrate our seriousness in tackling the issue. Malaysia is not the dumping ground for other people’s waste,“ she said when contacted by Bernama.

Last week, about 150 containers of plastic waste were shipped back to the exporting countries while another 84 will be sent back soon to the countries in the list, including Belgium, the United Kingdom, France and Vietnam.

Leela also said the ministry should make the conservation of natural resources a top priority in the country.

She said the cumulative impact of all existing and proposed projects within and near forested areas should be taken into consideration in the feasibility study of any new project.

“A real-time map showing existing infrastructure and projects as well as approved projects should be produced and updated regularly. Many projects have been implemented without sufficient consideration resulting in permanent negative impact on Peninsular Malaysia’s forests.

“Proposals for any projects within or near forested areas should be made transparent to allow public consultation and ensure proposals are evaluated holistically,“ she added.

Leela also pointed out that degazettement of forest reserves is a serious issue and should be avoided as much as possible while suggesting that any proposal to degazette forest reserves should be tabled to the State Assembly and not just the State Executive Council meeting.

“State governments should issue public notifications (in traditional, online and social media) on any proposed forest degazettement to reach a broader audience and conduct public hearings and consultations on the proposals.

“Reasons for degazettement must also be made clear, not just, for example, ‘for mixed development.’ These reasons must be strong, reasonable and important, explaining why the government has no other recourse but to degazette the land. Up-to-date information should be provided to allow for informed participation,” she said.

Meanwhile, president of the Protection of the Natural Heritage of Malaysia (Peka) Puan Sri Shariffa Sabrina Syed Akil said the Ministry of Environment must give attention to two major issues to resolve the problem of illegal plastic waste disposal.

“Corruption and weak enforcement must be immediately tackled, whether in the national waters, borders or ports, “ she said, adding that false declarations were also a problem.

She added that the federal and state governments as well as the Malaysian Anti-Corruption Commission must work on this issue and stern action taken against the culprits.

She stressed as Malaysia was a signatory of the Basel Convention, the government must immediately send back the wastes to the countries of origin, thus giving the signal that Malaysia is serious about tackling the issue of illegal waste disposal.

“We worry that if this effort is not continued, Malaysia may one day be labeled the ‘rubbish bin of the world’. And that may be too late to save the country,” she said. - Bernama