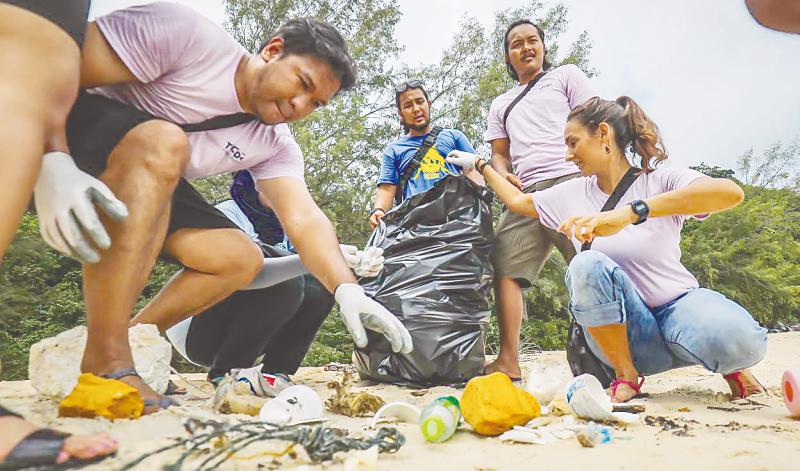 TICD participants clean up the beach.

TIOMAN: In a departure from conventional recycling efforts, two NGOs in Pulau Tioman are turning waste into construction material.

The NGOs – Reef Check and Rumah Hijau – have already built their own double-storey dormitory that is now being rented out to visitors to the resort island.

A total of 60,000 glass bottles were crushed and then mixed with sand to produce an alternative concrete mix, according to Rumah Hijau manager Hisham Uyub.

But building material is only one of many products that have been created through the two NGOs’ recycling efforts.

They also collect single-use plastic bottles and scrap metal and “re-purpose” them into materials to make usable items such as aprons, bags and wallets that are then sold to local businesses and tourists.

The purpose, Hisham said, is to reduce the amount of waste being sent to the incinerator.

He pointed out that up to eight tonnes of waste is generated on the island each day, and about three tonnes of that is recyclable.

“Our objective is to use all the recyclable waste.

“Along the way, we can also provide jobs and business opportunities for the locals while conserving the natural environment.”

However, he said, not all the recyclable waste could be utilised without proper separation.

“We are working with (environmental management firm) Alam Flora Sdn Bhd and the Tioman Development Authority to introduce waste separation at source.”

He described Tioman as “a very unique island” with healthy virgin rainforests, mangroves and sea grass as well as coral reefs, which set it apart from other islands in Malaysia.

He urged the government to take charge of recycling efforts on Tioman given its potential to provide steady job opportunities for the islanders.

The objective of the event is to promote awareness on marine conservation and preserve the coral reefs in Tioman.

Among the activities was a clean-up of the beach and coral reefs. About 180kg of waste were collected.

TICD 2019 also saw Berjaya Tioman Resort launching its Adopt-A-Coral programme, which enables guests at the resort to adopt a coral for a minimum sum of RM40.

The funds will be used to underwrite the cost of rehabilitating rescued corals for their eventual replanting in the reefs.

Adopted corals will be closely monitored during their recovery process in nurseries and once they are returned to their natural habitat.