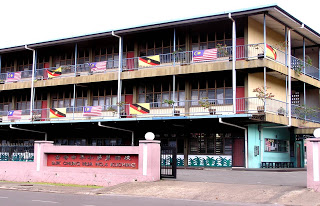 Moreover, this 22% group also has those hailing from outside Sarawak – namely Sabah, Laos and Australia.

It is disclosed that for the 2020 school term, the population of CHPS No 4 will represent 19 different races or ethnic groups.

Even before this, the school had recorded quite a number of Bumiputera and Indian pupils.

“Because of this, the SJKC (aided Chinese primary school) has been dubbed as a ‘mini United Nations’,” said headmaster Pui Jin Tung, who received a visit from members of CHPS No 4 Board of Management at the school along Jalan Nanas here recently.

During the meet, the headmaster and some board members had several brief exchanges with the parents.

Speaking to reporters later, Pui said the school would host a dialogue with the parents of all newly-enrolled pupils at the school this Jan 7.

He regarded the session as ‘an orientation for the newcomers’.

“We are seeing 211 new pupils next year, 22% of whom are non-Chinese. These new pupils are divided into six classes, each of which will house 35 to 36 pupils.”

Pui also viewed CHPS No 4 as ‘reflecting the multi-racial harmony in Sarawak’.

“CHPS No 4 emphasises on providing an environment (that is) not just conducive to learning, but one that also enables children to mingle well; instilling that sense of racial harmony and social unity in the young generation.”

He said the school had not turned down any application, given the maximum 40-pupil capacity for each class.

“Each of our Primary 1 classes next year will have about 35 pupils,” he said, adding that the school should be able to take in more pupils. — TheBorneoPost

1.We can help avoid tragedies

5.77.5 per cent of adult population fully vaccinated against Covid-19