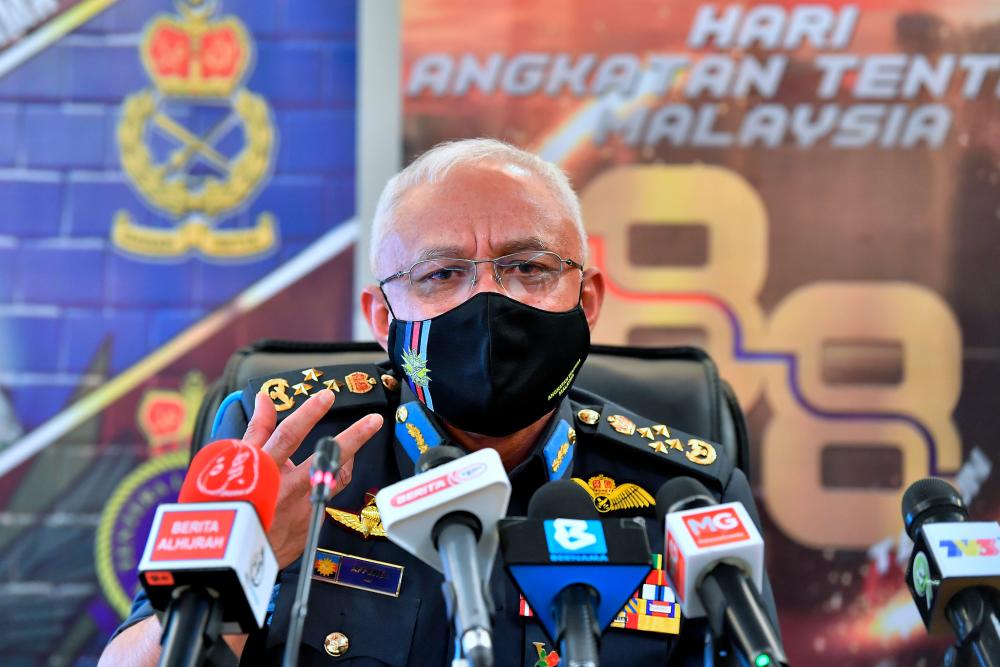 KUALA LUMPUR: The National Task Force (NTF) should be maintained even after the Covid-19 pandemic has ended as the team has proven its capability in curbing the entry of illegal immigrants into the country.

Chief of Defence Forces Gen Tan Sri Affendi Buang said NTF has not only succeeded in coordinating operation to prevent the entry of illegal immigrants as it was also successful in crippling other cross border crimes.

He said the mission in setting NTF was to strengthen the country’s border control from intrusion by illegal immigrants and it is translated through the implementation of ‘Operasi Benteng’.

“Thankfully, one year after its establishment, MAF with other enforcement agencies combined under NTF succeeded in achieving the entrusted responsibility.

“The operation was successfully carried out with meticulous planning and collaboration of all enforcement agencies involved directly in the operation,” he said in a special interview in conjunction with 88th anniversary of MAF at Wisma Perwira ATM, here recently.

The 88th anniversary of MAF will be celebrated physically at Kem Segenting, Port Dickson, Negeri Sembilan on Sept 22 without the presence of spectators.

Affendi said the feedback from all enforcement agencies was positive in response to the government’s initiative as NTF was able to unite all agencies and harness the efforts and energy in achieving the entrusted mission.

“The concept of the Whole of Government Approach has been effective compared to working in silos earlier.

“The cooperation need to go on as it has given positive impact in containing Covid-19 outbreak and curb cross border crimes from taking place at the country’s border.

On the aspect of enhancing defence strategy and preparedness of NTF, Affendi said NTF is always improving its existing defence and security strategies to ensure it is relevant as well as coordinated in accordance with the assigned trust.

He said in the effort to further boost the strategy, NTF had developed a Strategic Stronghold Plan (Pelan Strategik Benteng) based on government policies such as the National Security Policy, Defence White Paper as well as Security and Public Order Policy to ensure the continuous success and smooth implementation of Operasi Benteng.

At the same time, Affendi said the strong cooperation which has been forged with the enforcement agencies of other countries should continue to be strengthened such as sharing information and joint patrol at the border should to be carried out through the existing platform.

“It cannot be denied that there are challenges faced by NTF in the effort to eradicate the entry of illegal immigrants and cross border crimes.

“Among them is their changing modus operandi from time to time. As such NTF has to be sensitive and is always on a lookout for new approaches adopted by the criminals,” he said.

He said the country’s border control was also streamlined through increased capacity and preparedness with the acquisition of assets such as fast interceptor craft, rigid hull inflated boat, all terrain vehicle, scrambler motorcycles and drones.

Affendi said the acquisition of the assets has provided a high return of investment with the increase in arrest case statistics through Operasi Benteng. — Bernama