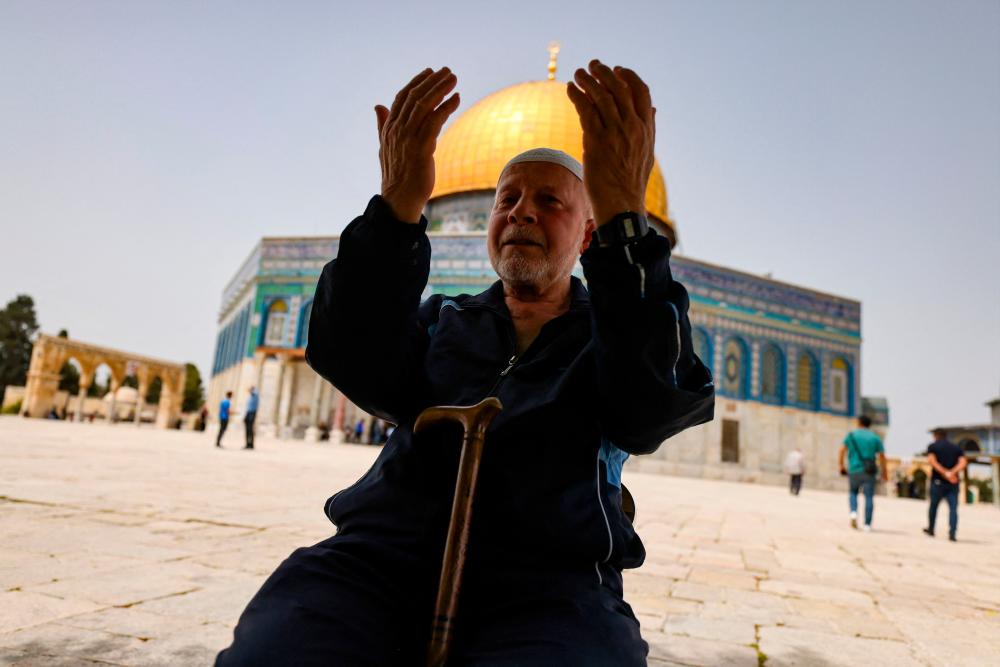 TOPSHOT - A Palestinian man prays in front of the Dome of Rock mosque at the Al-Aqsa mosque compound in Jerusalem's Old City on April 17, 2022. AFPPIX

KUALA LUMPUR: The Organisation of Islamic Cooperation (OIC) today has condemned and rejected all acts of Israeli military aggression on the Al-Aqsa Mosque.

The matter was stated in a speech by OIC Secretary-General Hissein Brahim Taha during an emergency meeting of the organisation’s Executive Committee which was held virtually.

The emergency meeting was held at the request of Indonesia to discuss the Israeli military’s recent atrocities against Palestinian Muslims at the holy mosque.

He said the land of Palestine in general and the city of Jerusalem in particular had recently witnessed an unprecedented increase in attacks and incursions by the Israeli army on Islamic and Christian holy sites, particularly the Al-Aqsa Mosque.

“I have spoken to several international parties and informed them of the OIC’s rejection and condemnation of Israel’s attempt to force the division of space and time within the Al-Aqsa Mosque for its people.

“We once again call on all parties and international organisations to shoulder their responsibilities and engage in efforts that lead to an end to the Israeli aggression as well as the establishment of an independent Palestinian State with East Jerusalem as its capital.

“We also want to emphasise the need and importance of preserving the history and laws that exist in Al-Aqsa Mosque because it is a place of worship specifically for Muslims”, he said.

So far, as many as 200 Palestinians have been injured within the grounds of the Al-Aqsa Mosque in clashes with Israeli forces over the past few weeks.

The disputed holy site, known as the grounds of Al-Aqsa Mosque for Muslims and Temple Mount for Jews, is located in the Old City of Jerusalem and was annexed by Israel during the 1967 Middle East war.

The site is administered by the Jordanian Muslim Endowment but is protected by Israeli police forces. - Bernama