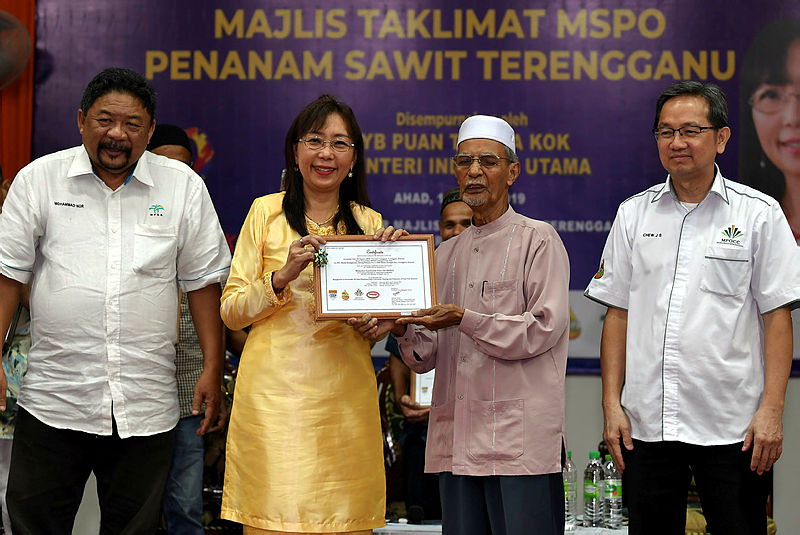 Primary Industries Minister Teresa Kok said as of July this year, only 47% of 5.8 million hectares of private planted areas in the country had obtained the MSPO certification.

“I realise many smallholders in the country are still unaware of the MSPO, that is why I go down to the grassroots to explain to them about the certification.

“We are hoping to get 70% to 80% of them certified by the end of this year, if not all, and we will continue next year for the remaining,” she told reporters after the MSPO briefing session with Terengganu oil palm growers in Kuala Berang, here yesterday.

According to Kok, some 54% or 91,498ha of 168,194ha oil palm plantations in Terengganu had obtained the certification so far.

Meanwhile, several smallholders told Bernama they were relieved now they were certified after taking advantage of the government 100% funding incentive.

Harun Ahmad, 69, said he was among the earliest smallholders in Hulu Terengganu that applied for the certification.

“I have faith that in whatever government does for the smallholders, there must be something good in it for us and in this case, the government has assured us that it would be much easier for certified smallholders to sell palm oil compared with the uncertified,” he said.

Meanwhile, Mohd Shariff Jusoh, 68, said he heard about the MSPO certification from a friend two months ago.

“I came today because I wanted to find out by myself what are the advantages of MSPO because I heard so many stories about it and now I know some of the things I was told before are untrue,” he said, adding that he would apply for the certification soon. — Bernama