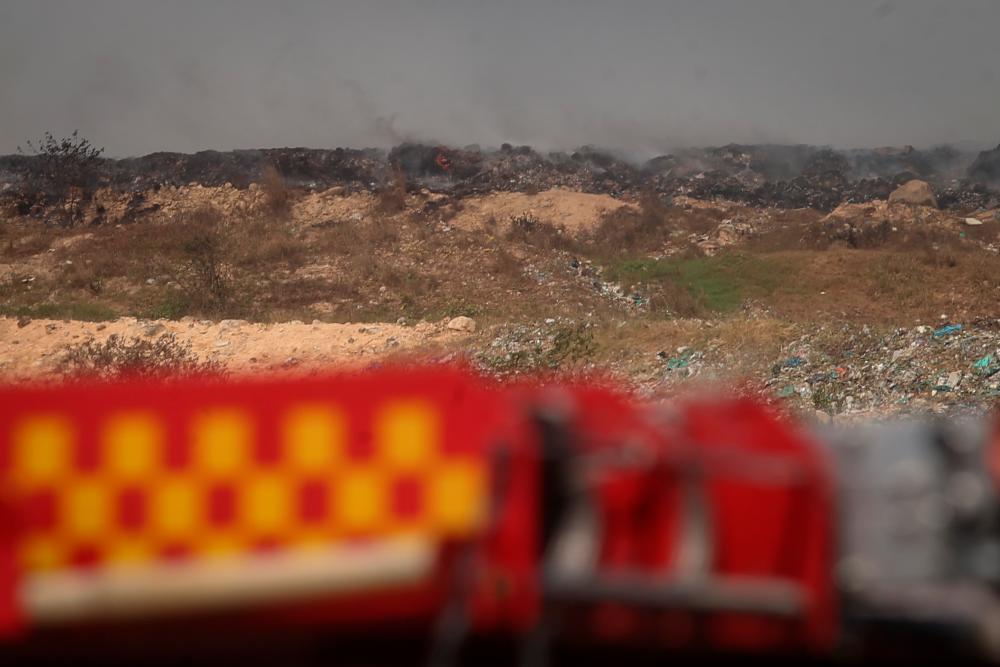 NIBONG TEBAL, Jan 17-A garbage disposal site in Pulau Burung was reported to have caught fire at about 5pm last Wednesday and the Malaysian Fire and Rescue Department (JPBM) with the help of the Volunteer Fire Brigade has set up a barrier to prevent the fire from spreading. BERNAMApix

NIBONG TEBAL: It will take another week to extinguish the fire at the Pulau Burung landfill here because of the large area involved.

Environment and Water Deputy Minister, Datuk Mansor Othman said the state government was trying hard to overcome the problems faced including asking the landfill management company to be responsible for the incident.

He said the fire was not only endangering the lives of some 400 residents nearby but also causing serious air pollution.

“The Fire and Rescue Services Department (JPBM) is facing a water shortage problem due to the low water pressure as well as shortage of sand to put out the fire. It is the responsibility of that company and we will ensure that it cooperates,” he told reporters after visiting the site with the Department of Environment (DOE) director, Sharifah Zakiah Syed Sahab today.

The fire broke out at the landfill at about 5 pm last Wednesday.

JPBM with the help of the Volunteer Fire Brigade quickly created a barrier to prevent the fire from spreading further.

The fire covered an area of ​​6.5 hectares out of a total of 16.2 hectares of the landfill. So far, no lives have been lost.

Mansor also urged the relevant agencies to assist in dousing the fire, described as the worst to happen so far since a fire outbreak that happened some years ago which resulted in a large-scale air pollution.

According to the DOE, action had been taken against the management of the landfill before for committing open burning and it was now in the process of taking action against the company under Section 34A of the Environmental Quality Act 1974.

“The rest have not responded as they are waiting for their husbands or wives to return home from work before moving out by 8 pm tonight.

“In fact, the residents’ committee is actively persuading and advising the other residents to do so for safety and health reasons,” she added.

Nur Syakila said this was the fourth fire outbreak at the Pulau Burung landfill over the past few years but this was the worst.

“This is the first time that the residents have to relocate temporarily due to the drop in air quality and the risks they are facing,” she added. - Bernama 1.Muhammad Ziyad saves Malaysian athletics the blushes with a bronze