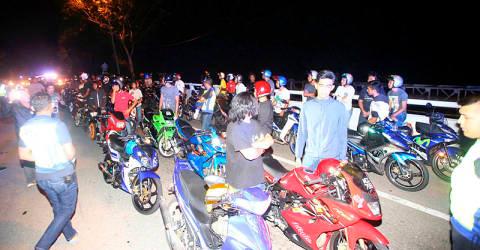 KUANTAN: A total of 117 summonses were issued involving various traffic offences through the Op Samseng Jalanan around here, yesterday.

Pahang police chief Datuk Ramli Mohamed Yoosuf said in the eight-hour operation beginning 2 pm, 74 individuals, aged between 10 and 28, were also detained. They were later released after the due documentation process was completed.

“Through the operation, summons were issued, among others, involving offences for not wearing a helmet, no (driving) licence, no road tax, as well as for modification of vehicle,“ he told reporters here.

According to Ramli, 20 motorcycles were confiscated in the operation, which focused on several locations including Kampung Kempadang and Beserah, here.

He said more than 40 police personnel were involved in the operation. -Bernama