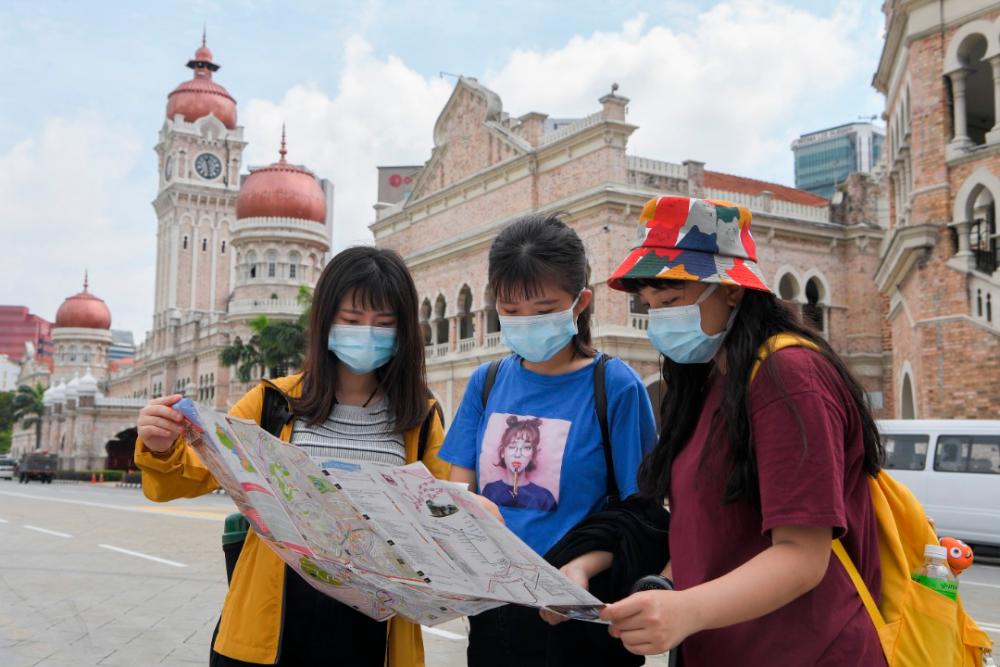 A group of Taiwanese tourists don face masks during their visit to Dataran Merdeka as a safety precaution in light of the Covid-19 outbreak. — Bernama

PETALING JAYA: Local airlines have cancelled over 1,500 flights due to the Covid-19 virus outbreak, according to the Malaysian Aviation Commission (Mavcom).

A Mavcom spokesman said between Jan 1 and Feb 29, a total of 1,576 flights by Malaysian carriers were cancelled due mainly to the Covid-19 outbreak.

“These cancellations involved total suspension of all operations on the Kuala Lumpur-Wuhan route by AirAsia X as well as Kota Kinabalu-Wuhan by Malindo Airways and AirAsia.

The spokesman said several other major routes were also affected by the outbreak, with airlines cancelling services on an ad-hoc basis due to low demand.

The spokesman said the Covid-19 virus outbreak had also resulted in a marked decline of market capitalisation by Malaysia Airports Holdings Bhd (MAHB) and AirAsia Group.

The spokesman said besides the impact from the Covid-19 outbreak, the decrease could have been due to general market sentiment.

Meanwhile, the Malaysian Association of Tour and Travel Agents (Matta) has called on major tourism service providers such as airlines and hotels to be fair to travel agents who are also victims of the Covid-19 outbreak.

Its president, Datuk Tan Kok Liang, said from late January, the virus outbreak began to spread at an alarming rate and had affected global travel, with many tourists cancelling or postponing their holidays.

“Many customers have already paid for tour packages, especially from February to June, and travel agents in turn have made payments to airlines, hotels and other suppliers on behalf of their customers,” said Tan.

“With the recent spate of cancellations, outbound tour operators may be saddled with an estimated potential liability of RM500 million collected from customers for tour packages departing from February.

Tan pointed out that in most cases, airlines and hotels do not offer refunds for cancellations and any refund given may be in the form of credit, which customers must use by booking a flight or room within a time period.

He urged consumers to negotiate with their travel agents for amicable solutions rather than pursuing legal action.