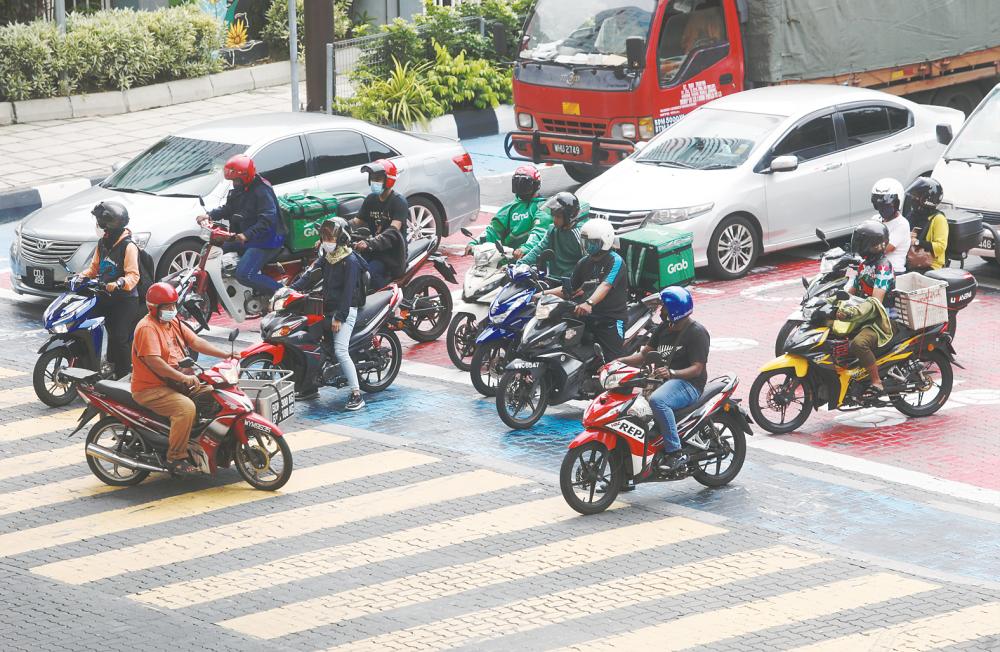 The alarmingly high number of road fatalities involving motorcyclists in Malaysia makes it a “no-no” to introduce a ride-hailing service on two wheels. – Asyraf Rasid/THESUNpix

PETALING JAYA: Allowing motorcyclists to pick up passengers like a taxi or a bus is an invitation to injury and death. Based on this alone, any proposal to allow ride-hailing services on two wheels should be buried for good, according to road safety experts.

The numbers are grim. From early 2001 to August this year, a total of 79,916 motorcycle riders have been killed on the road. That was 10 lives lost each day just because they were trying to get from one place to another.

As Alliance for Safe Community chairman Tan Sri Lee Lam Thye pointed out, saving lives should be the priority.

The service has been introduced in neighbouring countries Thailand and Indonesia but in Malaysia, ride-hailing services can only be provided in cars.

Lee said conditions in Malaysia are different from those of its neighbours.

“For a start, the population in the two countries are much higher than that of Malaysia,” he pointed out.

“The situation here is not as critical as that in those other countries,” Lee told theSun.

He said nearly 80 per cent of motorists killed on the road were motorcycle riders, making safety involving them a concern in Malaysia.

As expected, how safe the roads are also depends on the volume of traffic. When the movement control order was implemented last year to curb the spread of Covid-19, the number of road fatalities dropped by 24.9 per cent compared with the year before, as shown in data from the Malaysian Institute of Road Safety Research.

According to police records, a total of 4,634 people were killed on the road last year, compared with 6,167 in 2019. Motorcyclists accounted for 3,118 of those victims, while 888 were drivers or passengers in a car.

“When it comes to road safety, motorcyclists have a bad track record. An e-hailing service on motorcycles will only make it worse,” Lee said.

He expressed support for the government’s decision not to proceed with the service for now.

“The government has to conduct an indepth research on road safety in the country, focusing on the fact that motorcyclists account for most of the fatalities,” he said.

Lee advised the government to refrain from rushing through the decision-making process.

“We must first convince ourselves that we are able to deal with the problem we have now before we make this all-new service available,” he added.

He said a test run, as some have proposed, is unnecessary. “The priority should be to improve our road safety record.”

Lee added that if there were fatalities in a trial run, it would be like sacrificing some lives just to find out if it was a good idea to introduce the service.

In a report featured in The Jakarta Post on March 25, it was stated that the Indonesian motorcycle ride-hailing service, called Gojek, had strengthened its safety protocol, called J3K, since the start of the Covid-19 pandemic.

“Let us put this service on hold until our road safety record, especially for motorcycle riders, improves,” he added.

“First and foremost, safety on motorcycles is still a major issue in Malaysia. Motorcyclists account for at least 60% of road fatalities. Adding to this poor road safety record is therefore not a good idea,” he told theSun.

He added that it would be impossible to ensure social distancing between the rider and pillion, a necessary measure when the country is still fighting the Covid-19 pandemic.

He also said an additional e-hailing service would go against efforts to encourage the use of public transport services such as buses and trains.

“The government should (not approve) this proposal for an e-hailing service on motorcycles,” he added. World economy to slow, ‘paying the price of war’: OECD Aerodyne secures US$30m in investment bridging round led by Petronas Aerodyne secures US$30m in investment bridging round led by Petronas

More M’sians choosing to stay with their parents, property affordability remains a question

World economy to slow, ‘paying the price of war’: OECD

2.Aerodyne secures US$30m in investment bridging round led by Petronas

4.More M’sians choosing to stay with their parents, property affordability remains a question

5.World economy to slow, ‘paying the price of war’: OECD