Little hope of a decent life post-retirement for some 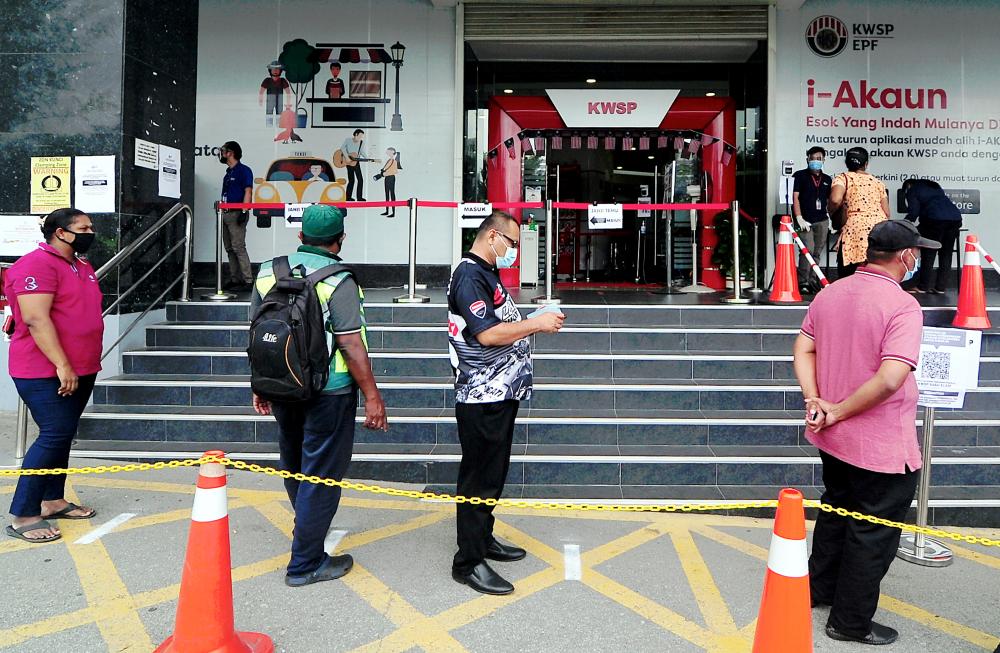 Contributors queuing to make i-Sinar withdrawal early this year. Withdrawals under i-Sinar and two other similar programmes have left many with very limited amount in their EPF savings for retirement. BERNAMApix

With four years left to mandatory retirement, he has only RM16,000 left in his Employees Provident Fund (EPF) savings, and next to nothing elsewhere.

With his current earning capacity, it is near impossible for him to earn enough in the next few years to enable him to survive, much less have a decent living post-retirement.

Yogendran is one of many in the middle and low-income group who had been forced to dip into their retirement fund during the Covid-19 pandemic.

He had taken out as much as he was allowed to under the three withdrawal schemes the government introduced to help those who had lost their jobs or had their salaries reduced.

Yogendran’s case is anything but rare. According to EPF chief strategy officer Nurhisham Hussein, the three exceptional withdrawals have left 73 per cent of its contributors without sufficient savings to retire above the poverty line.

“They will have to work an additional four to six years just to recoup the sum that they have utilised during the pandemic,” he told theSun.

The shocking truth is that almost half of EPF contributors have less than RM10,000 each in their savings.

Based on the assumption that one needs to have at least RM240,000 in savings by age 55 to afford a decent existence post-retirement, only three per cent of Malaysians meet that criterion.

Yogendran said he was forced to dip into his retirement fund because the factory where he was employed was operating only intermittently. “We were paid only for days when we had work,” he explained.

Even so, he considered himself lucky, given that some of his friends had lost their jobs. The fact that he has already paid up for his low-cost flat is another plus point.

Nonetheless, Yogendran acknowledged it would be inappropriate to rely on his three children for money once they are married.

He hopes to invest in a food stall as soon as he retires to make ends meet.

“My wife is good at cooking Indian and Malay food. We hope to make RM600 to RM700 a week. Hopefully that will be enough for us to survive from month to month,” he added.

Lorry driver Ahmad Fadzil is worse off. At age 58, he has barely RM7,000 in his retirement fund.

“I am really worried about how to make ends meet upon retirement,” he told theSun.

Ahmad realises that age is catching up with him. “I get tired if I have to drive for too long. I can’t go on like this forever,” he pointed out.

Nonetheless, he plans to continue working for as long as his health permits. Once he retires, he plans to sell his low-cost flat and move back to his kampung where the cost of living is much lower.

“Hopefully, I can buy a house and some land, so I can turn to farming to make ends meet.”

Ahmad said his two children are already married and he cannot expect too much from them financially.

A financial planner theSun spoke to noted those who have a limited amount in their EPF savings have very few options.

“Most of them will tell you that their will continue to work even after retirement,” he said.

However, he pointed out, it is not as easy as most people think.

“For a start, he will have to be healthy to remain employed,” he said. “If he keeps falling ill, he will not be able to keep his job.”

Nonetheless, he said, people could change their lifestyle to enable them to stretch every ringgit in their savings.

Other options include downgrading to a cheaper and smaller property or to “sell” the property to a close relative, like a son or daughter, who will in turn look after them, he added.

1.Rina hopes 30% of Perikatan candidates will come from women’s wing