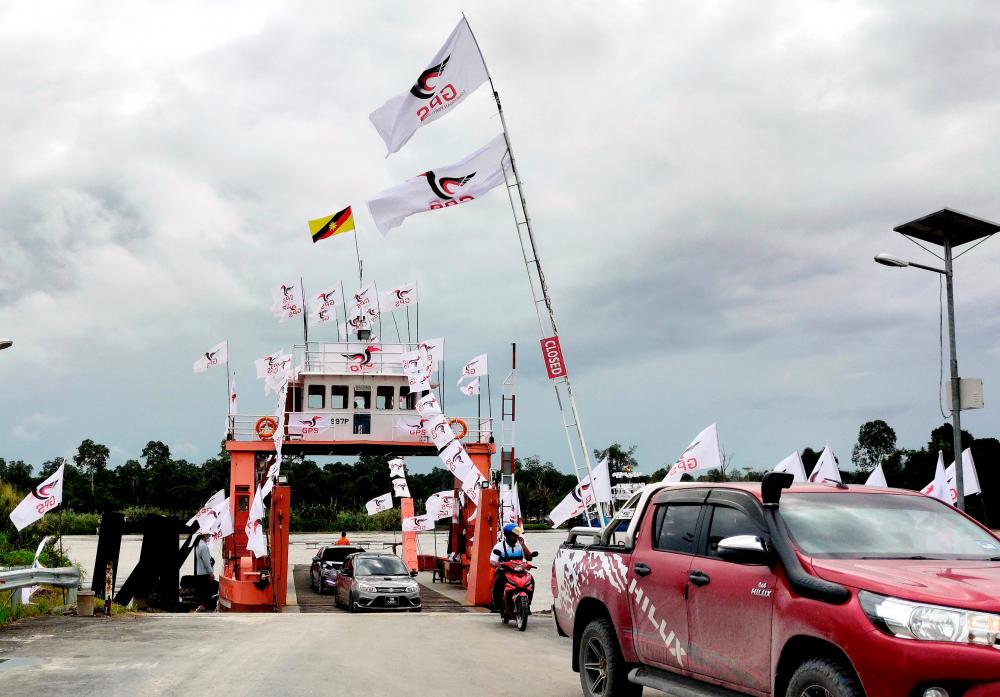 GPS flags fly high at the Marudi Ferry terminal. The relative absence of opposition flags and posters in rural constituencies is telling. Bernamapix

All indications point to an easy victory for the coalition that has had the last five years to tighten its grip on Malaysia’s biggest state.

Apart from its service record, which analysts say has won over the electorate, an opposition in disarray will only give GPS an easier ride.

Dr Jeniri Amir, senior fellow at the National Council of Professors, expects the opposition to do even worse than it did in the 11th state election in 2016.

Back then the GPS, in its previous incarnation as Barisan Nasional (BN), had six main opposition groups fighting to unseat it. This time, Jeniri pointed out to theSun, there are 10 parties trying to breach the GPS defence.

Jeniri said the rural seats are more or less already in the bag for GPS.

“The battle will be in the urban constituencies, and the DAP is the only opposition party that will have a real chance of snatching some seats away from GPS,” he said.

Jeniri expects PKR to do worse this time around. “It’s just a pale shadow of its former self,” he said of the linchpin in the coalition that unseated the mighty BN in 2018, only to lose it all less than two years later.

Amanah, also a PH component, and PAS are unlikely to win any seat, he added.

Jeniri said that in the eyes of Sarawakians, PH did them a disservice by cancelling many projects while it was in power.

“Furthermore, people want a united and stable government, not constant infighting. GPS has proven that it is able to meet their expectations,” he said.

Jeniri pointed out that the GPS government has already introduced 110 initiatives to deal with issues involving the economy, land matter, education and water supply. Its “Sarawak Ku Sayang” programme has helped not just the B40 but the M40 and small and medium enterprises as well to ride through the Covid-19 pandemic.

The GPS is a well-oiled and efficiently run machine, ready for any challenges. Its main party, the Parti Pesaka Bumiputera Bersatu will be contesting in 47 of the 82 seats up for grabs.

In 2016, the parties that now make up GPS won 65 seats under the BN banner. Jeniri expects them to win 68 or more seats this time.

Universiti Malaya political analyst Dr Awang Azman Awang Pawi pointed out that GPS, as the incumbent, is in a very strategic position.

“It has introduced many policies and spent an estimate RM4.5 billion during the pandemic to help the people. Over and above that was the aid provided by the federal government,” he told theSun.

The slew of financial and other aid will give the people a reason to want GPS to stay in power, he said.

Awang Azman said the recurring theme is that the people want a strong and stable government, not one that sees a lot of infighting.

He pointed out that they also want projects that have been proposed by the state government to be launched, given that these will bring big benefits to them.

“The opposition has only shot itself in the foot simply by engaging in open warfare (among themselves) on social media. For instance PKR and DAP, although being in the same coalition, are openly fighting over seat allocation,” he added.