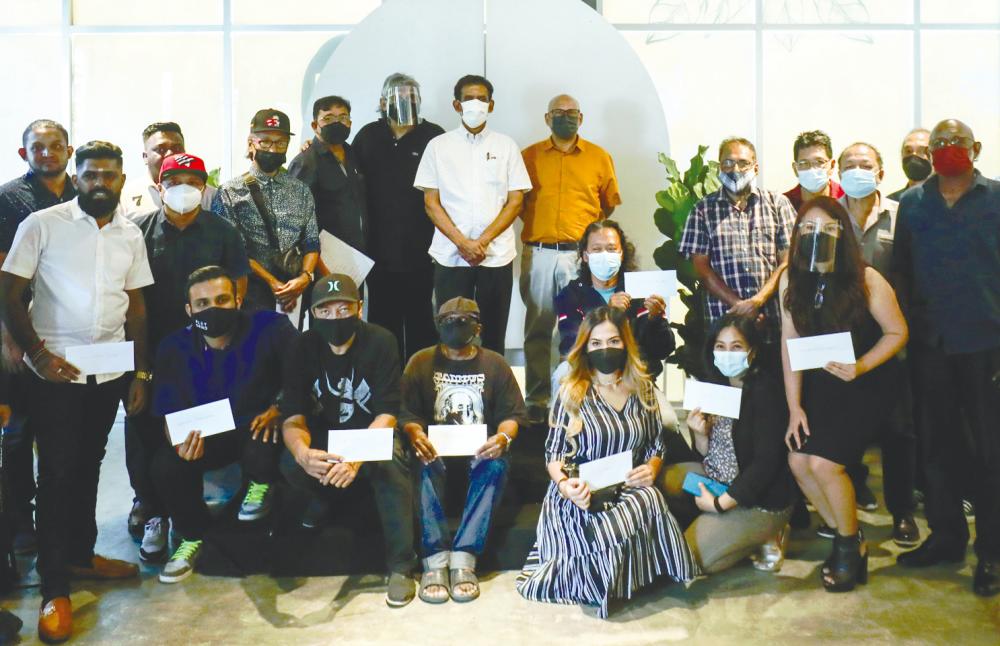 KUALA LUMPUR: The music has died for many entertainers in the country, especially club musicians who have been hit the hardest by the current economic challenges.

The Malaysian Artistes Association (Karyawan) and the Malaysian Club Artistes’ Division of Karyawan (MCAD) have not forgotten these struggling musicians, and have rendered financial aid to keep them going.

In a cheque presentation ceremony held on Saturday, Karyawan and MCAD presented RM1,000 each to 22 musicians and DJs under the initiative “Lending a Helping Hand” to help artistes who were impacted by the recent floods, those undergoing medical treatment and individuals who were still unable to work due to the effects of the pandemic.

MCAD chairman Jude Singho said the sub-organisation was started to address the plight of club musicians who have lost their source of income.

“Many of these musicians do not have any Employees Provident Fund (EPF) savings, and when the pandemic put a stop to the club industry, many became unemployed.

“Some chose to do part time jobs such as with Grab and busking, while others might have become homeless,” he told theSun.

Singho said while recording artistes have a safety net such as TV shows to put them back on their feet, club musicians were not as lucky.

In January last year, MCAD donated RM500 to RM1,000 to 36 club artistes with the sponsorship of ICAP Malaysia Sdn Bhd.

Singho said MCAD had also provided RM1,000 to Kelab Kami Kreatif, a non-governmental organisation set up by a group of musicians.

“The donation is to assist musicians with rental costs as they are taking up booths at Da Men Mall USJ 1 for the upcoming Chinese New Year celebrations. They will be allowed to sell their goods during the three weekends before and during the festival,” he said.

He expressed hope that the industry would be allowed to reopen soon with standard operating procedures in place to ensure artistes have an income.

Karyawan president Datuk Freddie Fernandez said the association was assisting those who need aid as much as possible.

“We are working hard to ensure that the needs of all our artistes are taken care of. We have been trying to work out busking permits for those who have turned to busking for a living. Most times, these groups get into trouble with the authorities and we want to ensure that they can play their music without having to worry about these things,” he said.

Fernandez added that Karyawan was also monitoring the situation so that they can match musicians with suitable employment that would help them get through tough times while they wait for the reopening of the industry.

He also urged the government to continue assisting the artistes, as they have done in the past 18 months.