Passive smokers waiting for their break 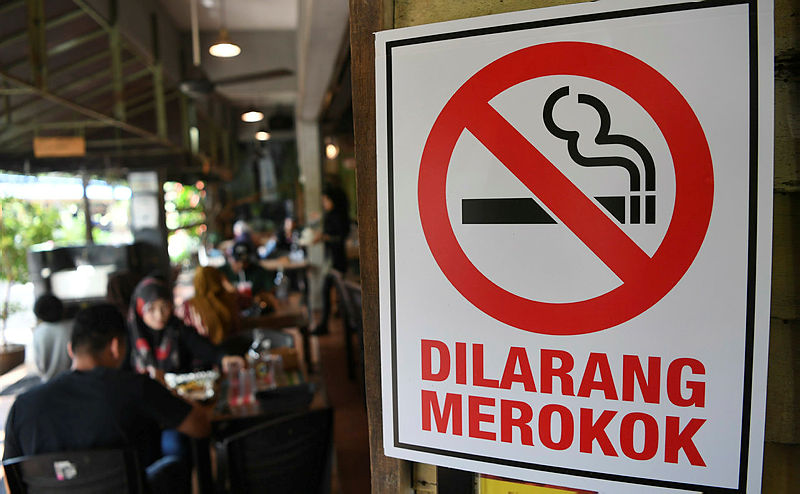 The ban on smoking in public eateries which comes into effect on Jan 1, 2019, was met with resistance from certain quarters and sparked a heated public debate. This first article of a two-part series is on the importance of enforcing the ban.

KUALA LUMPUR: The Health Ministry will enforce a smoking ban at all restaurants, eateries and roadside stalls nationwide effective Jan 1, 2019.

Unfortunately, this significant effort to improve public health was met with much resistance from certain quarters as soon as it was announced in Oct 2018.

Hardcore smokers and business owners rebuked the decision and staged protests, claiming that the law was a breach of their rights – the “right” to feed an addiction that kills more than 20,000 Malaysians annually.

Smokers argue that the practice of lighting up right after eating in a public place has become a “culture” and norm in Malaysia.

It is strange to think that an activity that threatens public health and places a massive burden on the healthcare system can be classified as a “culture”.

Even more appalling is the strong objection from restaurant owners and food premises operators whose sole concern is that the ruling will hurt their income.

An open letter by the Academy of Medicine Malaysia that is signed by representatives of 30 medical associations dismisses the notion that the ban would hurt business owners.

“We often hear the argument that no-smoking zones would affect businesses negatively. The fact is that the opposite has been proven to be true.

“In England, restaurants have prospered after smoking ban in eateries was introduced as operators focused on improving the quality of their food and attracted more families as customers, particularly those with young children.

Echoing the sentiment is the owner of Kafe Hirup Sedut, Shazul Khuzairi Zulkifli, 33, who was interviewed by Bernama by phone recently.

Having owned the café in Kota Tinggi, Johor for the past four months, he said that his business had so far been unaffected despite prohibiting smoking at his café.

“I believe that sustenance comes from God and we should put the health of our customers first. Business has been good so far.

“Smokers who visit my café for the first time may initially question the no-smoking policy but they are subsequently able to accept and adhere to it.

“I think that many of the restaurants that are reluctant to enforce the ruling have yet to even give it a go but are already anxious and unconvinced (that it will be enforceable),“ he said.

The ban on public smoking is indeed a reprieve for passive smokers (those who do not smoke but are subject to cigarette smoke) who all these while had to grit their teeth and bear the discomfort and repercussions of having to breathe in cigarette smoke when eating out.

Thankfully, the Health Ministry did not waver nor double back on its decision despite strong pressure from various groups.

Its minister Datuk Seri Dr Dzulkefly Ahmad had clearly expressed his stand of putting the interest of public health first and would not compromise on the ruling.

He was not even bothered by the threat of losing votes in the 2019 Parti Amanah Negara (Amanah) election due to his stand on the matter.

“A friend told me that my actions would cause me to lose vote in the party election next year (2019). That is okay. I’d rather lose than compromise people’s health,“ he was quoted as saying at the closing of the Amanah Convention 2018.

This ban is an initiative to widen the no-smoking areas gazetted under the Control of Tobacco Product Regulations 2004 with the aim of protecting the public from the numerous hazards of cigarette smoke.

The ban would mean that every food premises owner or operator would be required to display a no-smoking sign, to not provide smoking facilities such as smoking rooms or ashtrays and to ensure that no patrons would be smoking any type of nicotine including e-cigarettes, vape and shisha.

Refusal to cooperate or comply with the ruling would result in actions taken against not only the smoker but restaurant operator as well. Smokers caught breaching the ban would be fined a maximum of RM10,000 or face a jail term of no longer than two years.

The owner, meanwhile, can be fined up to RM3,000 or face six months imprisonment for failure to display a no-smoking sign on their food premises and if they fail to ensure that their patrons do not smoke on their premises, they would be liable to a fine of a maximum of RM5,000 or a jail term of no longer than a year.

However, the Health Ministry would first give a grace period of six months during which it would educate and warn restaurant owners and smokers.

Deputy Health Minister Dr Lee Boon Chye was quoted as saying that fines would only issued after the grace period.

“During the grace period, we will only give verbal warning to smokers if they smoke in open-air eateries or non-air-conditioned restaurants,“ he said.

The co-ordinator of the @SmokeFreeMY Initiative Muhammad Sha’ani Abdullah said that rights is that which when implemented, would not violate the rights of others. However, when a person smokes in public, he is actually violating the basic rights of others by exposing them to various health hazards.

Cigarette smoke contains some 4,000 poisonous chemicals like tar (used to make roads), ammonia (used in making floor-cleaning solvents) and napthylamine (used to make mothballs) that harms not only the smokers but non-smokers around them as well.

“Smokers need to respect policies that protect public health such as smoking prohibition in public places. Therefore, it makes sense that all restaurants and public eateries are listed as no-smoking zones.

“Malaysia is party to the WHO Framework Convention on Tobacco Control (WHO FCTC) since 2005 after adopting the obligations under Article 8 of the WHO FCTC to protect the public of cigarette smoke exposure,“ he said.

In fact, the Human Rights Commission of Malaysia (Suhakam) in a statement said that it welcomed the decision to ban smoking at public eateries and denied all allegations of the move being a breach of human rights.

On the proposal by some operators to introduce a smoking zone within their food premises, Muhammad Sha’ani said: “There should be no exceptions when it comes to a law protecting public health.

“If there are exceptions, then that means we are not taking the law seriously. Having a “smoking corner” breaches the objective of the law itself.

“We need to understand what an indoor area is. WHO defines is as any enclosed area with walls or a roof and smoking inside it (even in designated areas) would harm the health of the public,“ he said.

There should no longer be excuses when it comes to the issue. What is the point of calling for a change and a new government if the people still want to keep to their old and destructive habits?

Congratulations are due to the Health Minister, medical associations and anti-smoking activities who carry on advocating “an unpopular decision” for the sake of public health. — Bernama